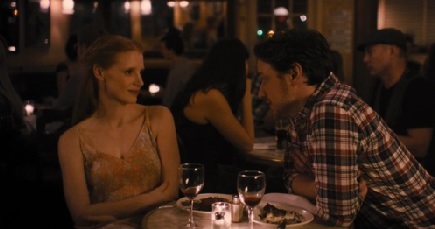 The first trailer for The Disappearance Of Eleanor Rigby, starring James McAvoy and Jessica Chastain, is finally out, showing us our first glimpse of the three-part movie releasing in the fall. The movie has a very unique and groundbreaking film structure, with the Weinstein Company planning the movie’s release accordingly.

See, the director [newcomer Ned Benson] initially made two separate films, The Disappearance of Eleanor Rigby: Her and The Disappearance of Eleanor Rigby: Him, with the story being told from two different viewpoints: Jessica Chastain’s ‘Her’ and James McAvoy’s ‘Him’. While some parts of the story would be similar [but with differences based on their varying perspectives of the scene], other parts would focus on their individual stories. In the ‘Him’ version, James McAvoy’s character is looking for Jessica Chastain’s character, and can’t find her. In the ‘Her’ version, Jessica has gone looking to remake her life after a terrible tragedy befalls her and her husband.

Then, there’s The Disappearance of Eleanor Rigby: Them, which is a condensed version of both the stories. This is a trailer for all three movies, but the studio is still hoping that people go see the films in the order they were made. For fans of cinema, you will get the most out of this story by watching Him and Her first [or Her and Him], and then watching Them. Both James and Jessica have been getting rave reviews for their performances, and the unique structure of the film will no doubt help them land awards attention. You will also get much more nuance out of the individual versions than you would get from the condensed version, understandably.

What do you guys think of the trailer? Are you interested in seeing the film? Let us know your thoughts in the comments below.