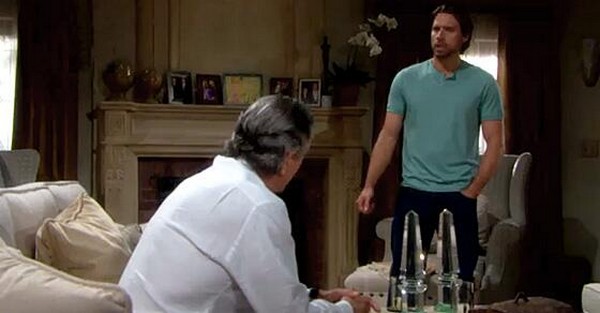 The Young and the Restless weekly review and recap – week of June 23rd – June 27th, 2014.  The hot story this week on Y & R was Paul and Dylan Survive the operations! and will Nikki dump Victor for Paul?

Monday – Dylan heard Nikki tell Paul that Dylan is his son. Paul’s eyes flutter but he remains in conscious. Christine, Todd and Michael come in. Todd prays while Nikki stands outside and cries. Dylan lets Nikki know he heard her and he demands to be Paul’s donor. Nikki begs Dylan not to do it. Dylan isn’t going to let his father die. Chris item is stunned when she hears him. Nikki turns to Christine and tells her it’s a long story. Dylan leaves to fill out the forms. Christine tells Todd she is taken back by Nikki’s news about Dylan.

Sharon can’t find Mariah and ask Nick to go look for her.

Visitor listens to Mariah and Ian’s private conversation and warns her after Ian leaves that she is playing with fire.

Cane wants Neil to postpone his wedding. Neil thinks Cane should mind his own business.

Devon tries to convince Hilary to be with him instead of his father. Hilary insist she is going to marry Neil.

Leslie is discussing Austin’s case with Avery. Nikki comes in to get Avery to go to the hospital to see Dylan. Ian tells Leslie he called the bar association about her little indiscretion.

Nick finds Mariah and offers her the job back. Nick warns her not to burnt Sharon.

Nikki and a dry try to talk Dylan out of the surgery to no avail.

Devon tells cane Hilary picked his dad over him. Cane tells him all three of them are going to end up hurt.

Tuesday– Hilary ask Jack for the rest of the day off because she is getting married. Jack is surprised but tells her to go get the future she deserves.

Lily promises Neil she won’t throw a fit on his wedding day.

Victoria and Billy argue about his trip to Australia to get dirt on Ben. She tells Billy she wants a divorce. When Ben shows up she starts taking his clothes off and tells him he is the one she wants.

Neil and Hilary are getting married in the park when Devon shows up.

Billy shows up at Chelsea’s to tell her things over between him ad Victoria. Chelsea hugs him.

Colin drugs some tea for Jill and when he is gone she offers some to Cane and Lilly.

Wednesday– Billy informs Chelsea that Victoria asked him for a divorce.

Adam is looking at pictures of Chelsea and Connor.

After they do it on the living room floor Victoria ask Ben to open up to her. Ben kisses her and leaves. Victoria makes a phone call.

Colin gets rid of the drugged tea so Lilly won’t end up drinking it. Colin has Lily’s phone. Colin puts the drugs in hills champagne and she she is about of knick out he acts like Lilly left her phone and he will take it to her. Outside he calls his associate to come get the necklace.

Leslie lets Austin and Summer know she is defending him because the court won’t let Avery do it.

Lily enters to get her phone sees the guy screams and smashes him over the head. Jill wakes up and the man takes off. Colin shows up and Lily tells him what happened.

Leslie shows up at Victorias and she tells her she is sure she wants the divorce and to file the papers.

Summer goes to kiss Austin when a cop gets in the way.

Thursday– Nick is back living at Sharon’s.

Todd is chatting with a still knocked out Paul. Avery is talking to Dylan and telling him to come back to her.

Christine is at the club when Todd calls her and tells her to get back to the hospital right away.

Nikki is talking to Victor about Paul and Dylan.

Tyler wants Abby back and tells her so. Then Mariah shows up and tells him what Abby and Noah did to her and Tyler has a change of mind.

Christine finds out that Paul opened his eyes briefly. Christine goes in and Paul wakes up.

Elsewhere Nikki and Avery are present when Dylan opens his eyes.

Christine makes it clear no one is going to tell Paul about Dylan. Dylan however is sitting in a wheelchair in Paul’s room.

Mariah shows up to Sharon’s to pay her part of what she owes her. Sharon invites her to stay for dinner.

Friday– Paul is confides and acting out of sorts in his hospital room so Christine makes everyone leave before he finds out that Dylan is his son.

No one wants Mariah staying for dinner but unfortunately for them Sharon doesn’t care and Mariah gets to stay.

Jack is telling Traci all about his dilemma with Summer.

Summer calls to talk to Phyllis. Summer tells Phyllis she wishes she was there.