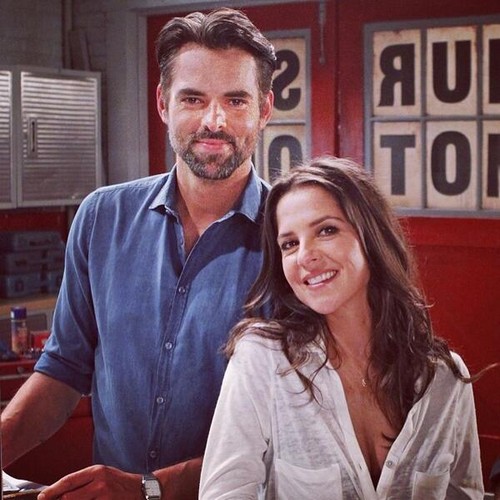 General Hospital Recap and Weekly Review June 23 – June 27th, 2014.  One of the big stories this week on GH was it looks like Franco is going to tell Michael that Sonny killed AJ, all the details, right here!

Monday– Nina stands up at Silas’s house. Rosalie her nurse shows up and acts like she didn’t know Nina could walk. Nina explains that her husband is out on a date. Nina wants payback and startS making a enemies list. On it she puts her mother, Silas, Sam, Ava, and Kiki. Rosalie thinks she. I gut be going a little far. Nina tells her she can always add her to the lost as well.

Sam and Silas are enjoying a picnic in the park. Silas keeps looking at her wedding ring. Sam notices and takes it off, they kiss, Nina calls and tells him she fell and can’t get up.

Ava is surprised to see Carly sitting in the loving room. Carly tells Ava her death has been coming for awhile. Sonny shows up with a pizza which Ava takes. When Carly leaves Sonny comes back downstairs to bitch at Sonny.

Franco is at Carly’s unpacking. Josslyn gets out of hand so Franco calls Kiki to come play with her. She has a ticker book. After Kiki leaves Carly comes home and sends Josslyn to bed.

Nathan thinks Levi told the judge that he lied. Levi tells him he will never be able to prove it.

Maxie is crying to Lulu. Lulu lets her hold Rocco. Maxie tells her she wishes Levi and Nathan got along with each other.

Tuesday– Silas is heading back to his apartment. Nina sends Rosalie on her way. Silas shows up and Nina cries as he helps her. While she is faking her fall Silas sees the broken plaque.

Nathan tells Mac what happened with Maxie and then tells him he thinks Levi played a part in it. Nathan has to calm Mac down. Franco shows up next and after finding out that women can’t seem to get over Sonny he orders a drink.

Rosalie scolds Silas for leaving Nina alone. Once she in her own bedroom Nina starts going over her list.

Levi defends himself to Maxie who then yells at Nathan when he comes home. Levi follows Maxie out with a smug smile on his face.

Ava decides she wants to drink while pregnant with Sonny’s child. He won’t allow it so she says she will come up with another way to torture him.

Patrick and Sam discuss the Nina Silas situation and then he ask when she is starting the investigation Sam tells him tomorrow and Patrick tells her he wants to help her.

Wednesday– Michael goes to see Sonny and gives him a late Father’s Day gift. They then talk about Michaels riverfront project and how proud of him Sonny is.

Franco is still upset about Carly’s connection to Sonny. Carly explains they are just friends. They kiss.

Nikolas is in the park registering Spencer for camp when Liz shows up. Nikolas tells her he plans on using his pul at the hospital to get her job back. Patrick shows up and tells Liz that Sam is looking into the accident for him.

Sam is going over evidence in the case when Alexis shows up. They talk about Nina’s fall and how Sam thinks she dos it on purpose. Sam tells her she needs to leave to meet with Patrick. Alexis ask to stay so that she can see Molly.

Silas insist he is the one that will be taking nina to her physical therapy even though she has a dozen reasons why he shouldn’t.

Nikolas shows up and ask Obrecht to rehire Liz at first she refuses but thenBritt says she and Nathan will turn against her so Obrecht gives in and rehires her.

Sam goes to the hospital to get Patrick so they can start their day of clue searching. She runs into Silas and Nina along the way. Patrick and Sam are headed to the scene of the accident.

Thursday- Franco returns the egg salad sandwich picture to Obrecht who is ecstatic. Franco wants a job in return. Later they come to some sort of a agreement and shake hands.

Franco sees Carly give Sonny a hug in the park.

At the accident site Patrick remembers there was a second crash. Sam finds some black paint in a guard rail and scrapes it off. Sam thinks she can find out where the car might have been fixed.

Rafe reads about the baby in the paper and is about to do a line of coke when Kiki walks in, he hides it with the newspaper. Rafe tells Kiki he stole money from Sam. Kiki suggest he talk to Sam about it. They hug.

Alexis gives Molly Ric’s things. Among the items are his wallet, his dead cell, something for Elizabeth, a picture of him and Molly and also a letter for her. Alexis wants Molly to come home but she refuses. Alexis leaves. When Molly answers the door later Rafe is there to Se Sam.

Nathan and Levi get into it but Maxie pulls them apart and she leaves with Levi. Anna comes by and gives Nathan his job back. Nathan tells her it’s his mission to reunite Molly with Ric he also plans on proving Levi isn’t who he claims to be.

Friday- Maxie and Levi argue about ELQ and what the riverfront project will cause. Levi wants to stop it.

Michael shows Morgan his riverfront project and wants Morgan to help him with it. Kiki shows up and her and Morgan get to work. Maxie and Levi shoe up and Levi tells them he is there to stop them.

Tracy meanwhile is cahoots with “Luke” to tale Michael down and regain control of ELQ.

Rafe apologizes to Molly for everything and then decides he will talk to Sam later and leaves.

Rafe goes to the baby’s grave with flowers.

Sam and Patrick go to a shop and ask about the car. At first he doesn’t want to help but when he finds out the baby dies he pulls it up. Sam is stunned by what she sees.