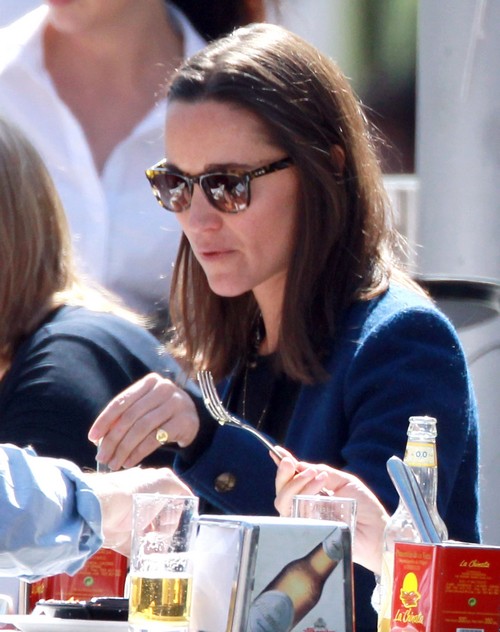 NBC has been promoting their Matt Lauer interview with Pippa Middleton as though it’s capable of saving the world. As IF, Pippa. I’m not really sure why she’s still relevant enough to warrant an entire interview on Today to herself, but I guess being Kate Middleton‘s sister continues to pay off for her.

Anyway, we’ve gotten snippets from the interview so far, and needless to say, Pippa Middleton’s working hard to seem relatable to the masses – even if she’s doing a terrible job at it. First of all, she claims that she underestimated the size and scale of the royal wedding, claiming that it was just a ‘family wedding‘ to her. Um, seriously? So she didn’t see the million people waiting outside, or the billion cameras pointing at them, or the fact that the wedding was in a FREAKING PALACE. Plus, it’s not as though she didn’t take full advantage of that fact, wearing that dress and unintentionally stealing the limelight from her sister.She also claims that she felt bullied after the wedding, explaining, “I felt publicly bullied a little bit just by, you know, when I read things that clearly aren’t true or that, whichever way someone looks at it, it’s a negative side. It is quite difficult. Because eventually I’m just paving my way and trying to live a life like any 30-year-old.”

Right, and any other 30-year-old would be able to get away with not working for months at a time, or using their royal connections to score gigs that they never would have gotten otherwise? Pippa was not qualified to write for Vanity Fair magazine or The Telegraph, yet she ended up getting the job anyway. She was not qualified to release a cookbook, but she did it anyway. I guarantee you, no other 30-year-old gets those opportunities. So Pippa stating that she’s just ‘paving her way’ like anybody else her age is ridiculous. Getting bullied by the media is just a side effect of living a public life. If she doesn’t like it, maybe she should go to school, stay away from the spotlight, and get a job which she’s actually qualified for.