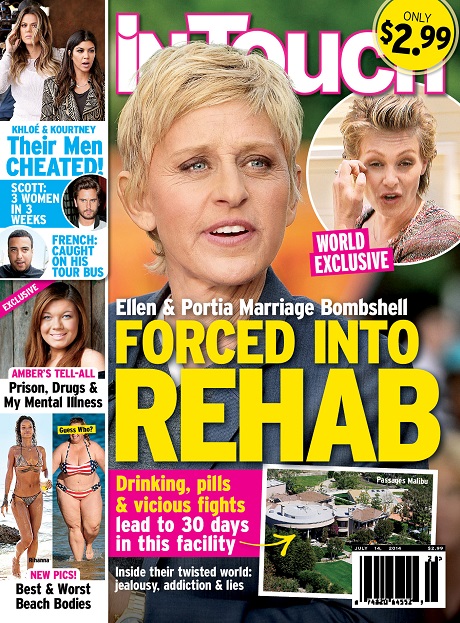 We have been hearing for the last few months that Ellen DeGeneres‘ marriage to Portia de Rossi had hit a really rough patch and, apparently, things have been a whole lot worse than anyone realized. The couple have been dealing with a huge disagreement over having a baby, with Ellen insisting that they stay child-free as originally intended and Portia realizing she’d like a shot at motherhood. She has lived under Ellen’s thumb since day one and that has left her fairly bored.

Ellen picks the projects that Portia works on and they are pretty few and far between. The rest of the time she is left to her own devices while Ellen’s career rolls on. Boredom is what made Portia decide that a baby might be a good idea after all and Ellen’s reaction was heartbreaking.

Before they paired up, Portia had struggled with alcoholism, and now that things are rocky she has apparently started drinking heavily again. According to the July 14th print edition of InTouch, Portia has also started pill popping and after a particularly nasty fight with Ellen she has agreed to do another stint in rehab. Sources say that 30 days inpatient was the only way that Ellen would even consider staying in the marriage — but that doesn’t mean that these two are going to make it much further together.

Khloe and Kourtney Kardashian are at entirely different places in their lives but they both are apparently dealing with the same major problem — cheating men. It seemed like mere moments after Kourtney announced her pregnancy that Scott Disick began behaving horridly. He has been drinking like crazy and has been spotted falling down drunk all over the Hamptons.

According to InTouch, he also has been linked to three random chicks in as many weeks! As for Khloe, well, she should have known that French Montana was trouble right? Especially since his wife and last girlfriend both told her! Anyway, he was apparently caught on his tour bus with some bimbette while Khloe was filming in the

Portia de Rossi Went To Rehab In May, Cause Of Marriage Problems With Ellen DeGeneres