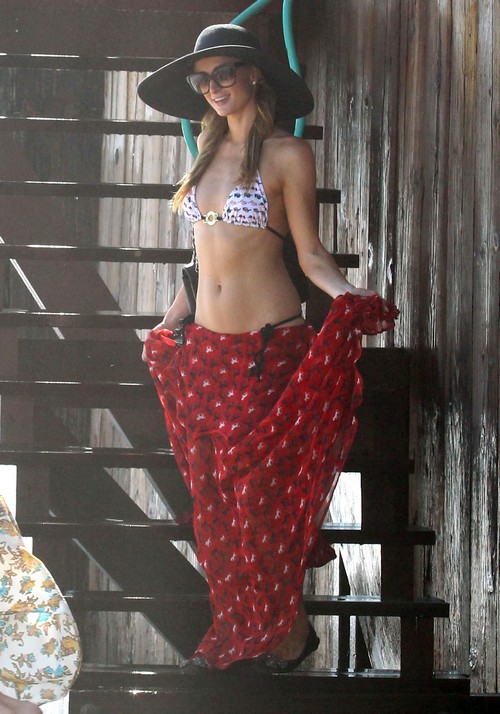 Paris Hilton isn’t 22 anymore but you sure wouldn’t know it given how fabulous she looks in a bikini. The 33-year old rocked a white patterned suit at her Malibu beach house while preparing for a holiday barbecue. Earlier in the day Paris and her sister Nicky Hilton spent time together hitting the shops and picking up supplies for a barbecue. Later on Nicky posted a photo of them together slaving over a grill making a batch of burgers.Paris was also spotted chilling out with Stephen Dorff and his blonde friend. The whole crew appeared to be in great spirits and it looks like it was another fun holiday for the heiress. Aside from enjoying the beach and quite obviously keeping herself in great shape, what is Paris up to? Well apparently she has been working in the studio quite a bit in recent months. She signed with Cash Money to do a second album and has expressed her excitement at working with such a great team.

Back in March Paris discussed working on her music and said that she has actually written the new tracks on her forthcoming album and that this project will also feature the stylings of Snoop Dogg, Flo Rida, LMFAO and Lil Wayne. She has also stayed quite busy with various charity work that keeps Paris traveling the globe to lend a helping hand. It seems that, at least for now, Paris is leaving reality television in the dust. Do you wish that she would reconsider that and return to television on a weekly basis? Are you looking forward to hearing more music from Paris? Tell us your thoughts in the comments below!