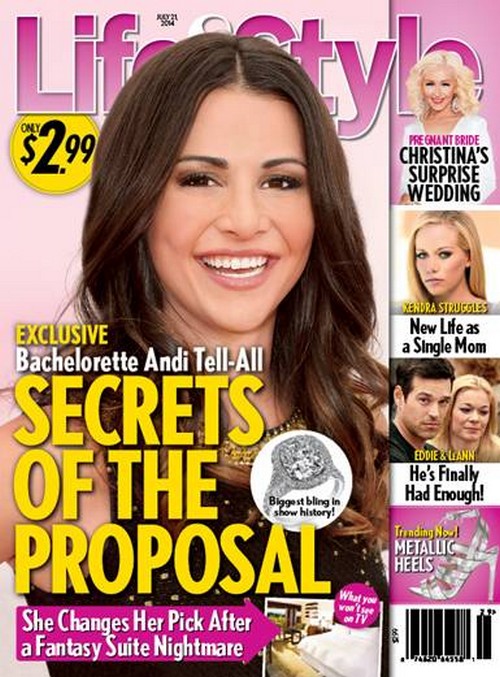 What have you thought of this season of The Bachelorette?  Has Andi Dorfman had a decent group of guys to choose from or do you agree with those who think that ABC purposely made it difficult for her to find a decent guy in the bunch that they hand picked for her? According to the July 21st print edition of Life & Style Magazine Andi thought she knew which guy she was going to choose until they hit the Fantasy Suite. A disaster on one of those dates made her completely change her mind and ultimately offer that coveted final rose to someone completely different!Are you surprised that Eddie Cibrian and LeAnn Rimes are still together? I mean if ever the deck seemed to be stacked against a couple it would be these two- to the point that I have to wonder if they stick it out simply to avoid the I-told-you-so’s.  Even if that has been the case, according to Life & Style Eddie may be at the very end of playing along. Between LeAnn’s lack of ambition and trotting after him like a puppy dog it sounds like the occasional actor is contemplating ending the marriage.

Kendra Wilkinson is having the worst summer ever. Just a few short weeks after her husband Hank Baskett was caught creeping with a transsexual model, Kendra is basically dealing with life as a single mom to Hank Jr, 4 and her new baby girl, Alijah. It’s not exactly the path that Kendra expected to find herself on this summer and it is taking a serious toll on her. Do you think that when all is said and done the former Playboy model will end up filing for divorce? Tell us your thoughts in the comments below!