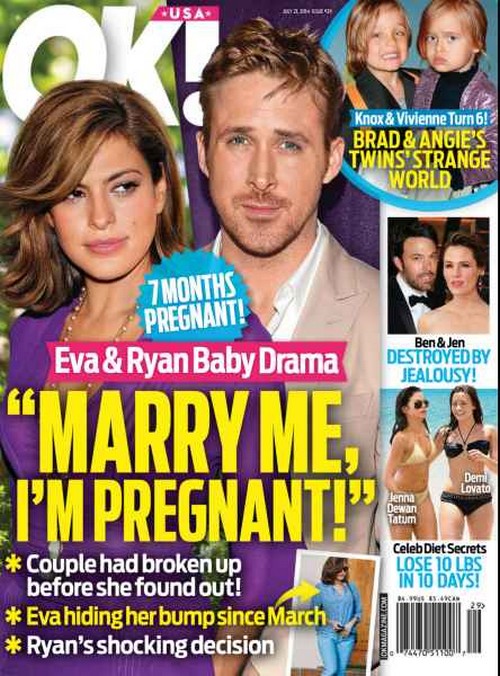 Despite rumors alleging that Ryan Gosling and Eva Mendes had broken up last year, new reports suggest that Ryan and Eva are still together and happier than ever. Not only that, but a report from OK! Magazine claims that Eva is actually seven months pregnant with Ryan’s baby.

A source tells OK!, “She’s been ready for motherhood for a while now and to be sharing this experience with Ryan is a dream come true for her!” Ryan and Eva got together over three years ago, while filming The Place Beyond The Pines. However, they have been on and off for those three years, often shunning the spotlight and working out their differences in private.

Even if the couple was on the verge of breaking up, this pregnancy news might have injected some new life into their relationship. The source adds, “Ryan grew up without a dad, so he always said when he had kids, he’d be there no matter what. This is it for him.”

Of course, we also have an additional story about how Eva wants to get married because she doesn’t think a child should be worn out of wedlock, but Ryan doesn’t think marriage is necessary. Trust a tabloid to turn this into a story of gender differences, where the woman wants to get married and the man doesn’t. From what we’ve heard of this couple, the opposite is true – and Ryan reportedly did want to get married in the past, but Eva wasn’t willing to commit to a marriage quite yet. Will she change her mind with a baby on the way? I guess we’ll have to wait and find out.

What do you guys think of the happy couple’s pregnancy news? Let us know your thoughts in the comments below.