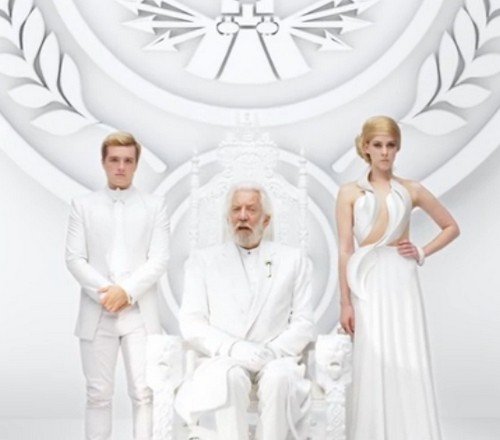 We received a brief 1-minute long teaser trailer for The Hunger Games: Mockingjay Part 1, which turned out to be an in-universe propaganda piece from President Snow [Donald Sutherland]. And now, we’ve received a second teaser trailer, much in the same vein but showing some rebel-centric propaganda.

The first teaser focused on President Snow’s message to Capitol citizens about standing together in the face of adversity, and the biggest surprise was Peeta Mellark [Josh Hutcherson] standing next to him. For those who can’t remember [or haven’t seen Catching Fire], Peeta gets captured by the Capitol at the end of the second movie. Clearly, he’s been brainwashed and tortured into helping the capitol, indicated by his standing by Snow’s side.

However, we also see some more familiar faces in this teaser. First of all, the teaser starts off in the same manner as the first teaser, with the Capitol TV seal. Then, it moves to President Snow giving a similar message about unity to Capitol citizens, but this time, Johanna Mason [Jena Malone] also stands by his side. As Snow intones the importance of unity, the feed starts cutting out, with static intermixing with Snow’s speech. We start to get glimpses of other people, when it finally settles on Beetee [Jeffrey Wright]. We hear a quick jumble of words, including ‘District 13’ and ‘Message’, before he ends with, “The Mockingjay Lives.”

Wooooo. Was that a great teaser, or what? The marketing team at Lionsgate continues to  knock this out of the park. They’re building anticipation for the first reveal of the ‘Mockingjay’, a.k.a. Jennifer Lawrence‘s fiery entrance. No doubt, we’ll get a full theatrical trailer at Comic-Con in two weeks, but it’s good to have these in-universe teasers to remind us of the tone of the film.