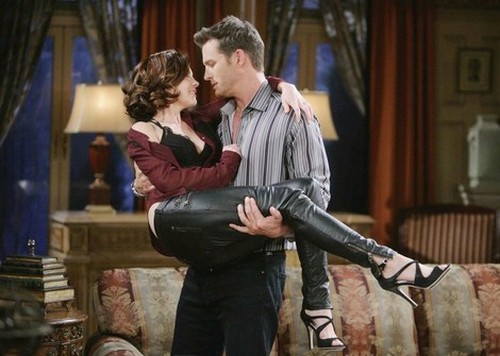 Days of Our Lives continues its narrative twists and turns, with the latest promo showing some major shockers going down in Salem next week. The promo shows Brady Black [Eric Martsolf] blacking out, and then Theresa Donovan [Jen Lilley] framing Brady for an attack on his own father.

You know, the promo is actually quite sinister, starting off with Brady not remembering the last 24 hours. Theresa then tells Brady that he hit his father over the head, even though it’s her behind that attack. She tearfully tells Brady, “You hit him over the head, ok?” The next scene showed Brody sitting by his father’s bed, wondering how he could have done such a thing. But then, what he doesn’t remember is him being passed out when Theresa attacked his dad.

This being a soap opera, there’s little question about Brady finding out the truth. The only question is when and how he’ll find out the truth. Will Theresa break down and tell him? She seems pretty close to losing it already, and this attack on Brady’s father might be the final push she needed to send her over the edge. Or will someone else who witnessed the attack or found out about it be the one to tell Brady?

It’s especially dangerous for Brady considering his proximity to Theresa, and how far she’s willing to go to keep up the charade. Will she hurt Brady if he gets too close to the truth? I guess we’ll have to tune in to find out.

What do you guys think of the promo clip? Let us know your thoughts in the comments below.