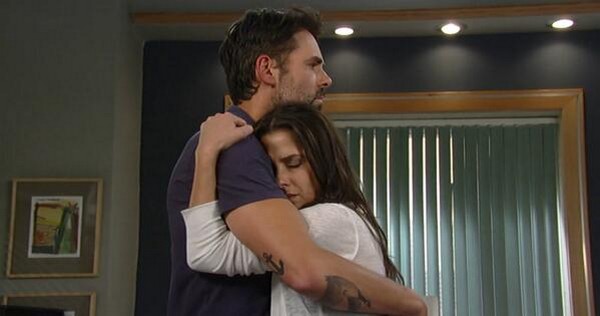 General Hospital Recap and Weekly Review June 23 – June 27th, 2014 is below for your enjoyment!

Monday– Ava and her mother fake a fight to throw Sonny off their scheme. It seems to work for the moment.

Rafe is driving while Molly questions him. Rafe tells her he was out up to hitting Patricks car. They fight back and forth and Rafe ends up hitting a roadblock. Mollynis knocked out in the car. Rafe climbs out but hits the ground soon after. Dante and Sam arrive and try to get them to wake up.

Silas and Nina are watching the fireworks. Silas can’t believe that Rafe hit her. Kiki shows up terrified for Rafe. Silas calls Sam and she tells him about the accident. Silas takes off. Nina tries to convince Kiki that she can leave as well.

TJ calls Molly and gets no answer. He voices his concern to Alexis. Alexis and TJ run into Patrick who informs them that Rafe is responsible for the accident that killed his son. Alexis calls Silas and he tells her about the accident Rafe and Molly were just in.

Michael,and Morgan step out of Alice’s room with Tracy and see Molly get taken by on a gurney. Sam explains everything to them. Rafe goes by next and when no one is paying attention Patrick sneaks in and lays into him for killing his son. Dante comes in and starts to drag Patrick out but Rafe calls for him.

Tracy goes back in Alice’s room followed by Michael and Morgan. Monica tells them how bad Alice’s situation really is.

Lulu wakes up from her procedure and Olivia is there. They discuss the differences between Dante and Sonny which can only lead to bad things. Olivia gets a message and heads off to work.

Tuesday– Ava’s mom is going through Sonny’s office when Ava calls and scares her half to death. Ava tells her she needs the flash drive and without she is as good as dead. Ava knows it must be in the safe. Her mom says she can crack it.

Jordan runs into Shawn (literally in the park. Jordan informs Shawn that TJ won’t take her calls. They start arguing about each other’s employers and before it gets to far out of hand Sonny calls Shawn and directs him to his office to do something for him.

Ava’s mom gets the drive and is in her way out when she runs into Olivia and when she realizes who she is she brags about what she has done. Olivia calls Sonny. Ava calls and Sonny answers the jig is up. Sonny tells Ava’s mom she is headed back to New York. Olivia advises him to hide his stuff better and then tells him to give her best to Ava.

When sonny gets back home he takes Ava’s phone.

Monica lets everyone in Alice’s room her only hope is a transplant.

Molly wakes up and gives a statement to Dante. She remembers Rafe saying he caused the accident but can’t remember anything else. Rafe is trying to tell Patrick when he seizes. Obrecht wants patrick to do the surgery on races brain to remove the fluid. Patrick doesn’t want to but she insist and tells he had better put his feelings aside. Sam tells him to for Rafe what he did for Jason. Silas makes it clear he will pay if he kills Rafe on the operating

Franco tells Carly about his job at the hospital. She is thrilled for him and sure he will do great.

Wednesday-Maxie and Nathan are still handcuffed together. They give each other bedroom eyes until Levi comes in whining about his Visa and ruins the moment. Levi thinks they were having a sex game of some kind. Maxie explains she was arrested and then the key was lost. Levi easily finds the key.

Jordan meets with Anna and gives her more information about Julian’s boss. They decide to look into Mickey and see what they can find.

Mike shows up and ask Jordan to dinner at the Metro Court.

Silas tells Nina over the opine that race is still in surgery. After she hangs up Rosalie comes in. Nina is trying to throw herself a pity party. Rosalie snaps her out of it by reminding her that Rafe knows everything. Nina is confident Patrick will fix that little problem for her.

Julian finds Alexis crying over what’s happened with Molly. Julian attempts To calm her down while she tells him all about Rafe being on drugs. Alexis tells Julian she doesn’t know what she would do without him, kiss kiss.

Meanwhile Dante is feeling guilty for the whole situation that Molly, Rafe and Patrick are now in. He blames it on hi spoor decision making. Lulu tells she is sorry he went through that.

Patrick is doing the surgery on Rafe and having a conversation with the proverbial devil on his shoulder when Rafe starts hemorrhaging. Epiphany snaps him out of it in time for him to stop it. After the surgery Silas ask patrick how Rafe is.

Thursday– Nathan is in a towel again arguing with Maxie about Levi. He finally puts on I some clothes and heads to work. Lulu shows up and tells Maxie how great Nathan is. Lulu is sure Maxie has feelings for him. Lulu leaves and Maxie daydreams about Nathan until an immigration agent shows up.

Lucas and Felix had a Golden Girls marathon. Felix leaves to get dressed and Brad shows up and kisses Lucas. Lucas pushes him away and explains he has feelings for both him and Felix and isn’t sure what to do. Lucas tells Brad to leave.

Nathan is beating the crap out of his work locker when Dante walks in. Dante tells him about Rafe. Then Nathan unloads about the while being handcuffed to Maxie bit. Dante thinks Nathan likes Maxie.

When Alice wakes up Monica tells her she had a heart track. Alice tries to tells Michael something but Tracy shuts her up. Monica tells Alice her heart is failing and she needs a new one. When everyone leaves Alice tells Michael they need to talk.

Kiki consoles Morgan and they discuss how they are friends now. After a hug Kiki takes off.

Nina hears Patrick tell Silas and Sam that Rafe is now brain dead. Silas accuses Patrick of doing it on purpose. Sam drags Silas away from Patrick and takes him to see Rafe.

Sam corners Patrick and ask him of he deliberately messed up Rafe’s operation.

Friday– the Immigration agent explains to Maxie that Levi lacks a visa. The agent is going to have him deported. Maxie leaves a message for Diane. When Nathan walks in they look at him accusingly.

Lucas whines to Lulu about his guy problems. Lulu tells to go and talk to the man he wants.

Brad bust in on Felix taking a shower at the hospital. Brad tells Felix to back away from Lucas. Lucas shows up just in time to see Brad kiss Felix and be pushed away. Lucas was going to make his choice but now instead he is just going to leave. Lucas takes off.

Kiki is talking with Morgan a out Rafe being brain dead. Tracy ask if he is a organ donor. Rafe is. Tracy goes to tell Alice she has found her a heart and she takes Michael with her to find out about it. Kiki says she will talk to Silas about it.

Silas is sitting with Rafe. Nina comes in saying she is worries about Rafe. Kiki arrives and wants to talk to Silas in the hall. Kiki points out that Rafe is a match for Alice and that she needs a transplant.

In Rafe’s room Nina is talking to him about how he he is helping her to destroy Silas and Sam. Nina promises him he will have a great funeral. Rafe opens his eyes, the look on Nina’s face is priceless.

Patrick tells Sam he didn’t hurt Rafe on purpose. Sam believes him. Sam doubts it will be this easy to convince Silas. Sam hugs Patrick.