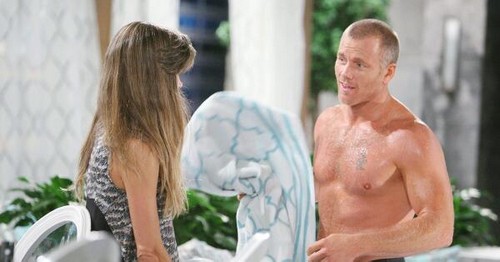 The Young and the Restless weekly review and recap for the week of July 7 – July 11th, 2014 is below.

Monday – Nick and Sharon watch the fireworks. Sharon ask him if he is fine with not marrying here Nick says that he is and they kiss.

Ian scares Mariah, Ian tells her she isn’t safe there and she needs to convince Sharon to let her move in.

Nikki is served with papers from Ian. Victor tells her not to worry and to go to the hospital. When she leaves Victor calls Nick and informs him if the lawsuit.

Nick tells Victor about Mariah’s connection to Ian. Sharon overhears and wants to know what Nick is talking about. Nick tells her Mariah is friends with Ian Ward. When Mariah shows up she tells Sharon she has no where to go. Sharon tells her to go to Ian. Mariah lies and says she has been staying away from Ian. Sharon buys it and tells her she can move in.Chelsea and Billy are being watched by asan on his camera and he is not happy. They head downstairs and after Chelsea gives him a back run he grabs her and kisses her. Chelsea tells him it’s a bad idea but they still wind up having sex.

Over at the hospital Paula and Dylan discuss him being Paul’s son and taking time to figure it all out.

Nick calls Victor and tells him he figured out Ian’s weak spot.

Victoria is eating strange stuff when Ben shows up. They both enjoy feeling the baby move. When Ben leaves Victoria calls Billy and tells him happy birthday.

Mariah goes to see Ian who tells her he was right about Sharon letting her move in.

Tuesday – Chelsea wakes up naked next to Billy. Billy tells her she was good but he still wants Victoria. When Anita shows up Billy leaves. Chelsea tells her mom it was a one time thing and will never happen again. Kevin calls Chelsea and she checks her email. Chelsea finds out that it seems Stitch stole Ben’s identity when he died. Chelsea goes to call,Billy but Anita ask her if she really wants to do something that might cause Victoria to leave Stitch and go back to Billy.

Jack gives Kelly breakfast in bed. When he brings up Stitch Kelly says she needs to get to work. Jack wants them to,have sex again first.

Courtney and Summer discuss her quick marriage to Austin. Summer tells Courtney she is going to stand by Austin no matter what happens. They hug.

Billy tells Jack about sleeping with Chelsea. Austin shows up and tells Jack if he goes to jail he will divorce Summer. Jack suggest he do it now. Austin refuses, if he manages not to go to jail he wants to be with Summer.

At Jabot, Billy tells Jack he’s a mess. Jack asks, “What’s her name?” Billy sighs – last night was wrong. Jack can’t see why when Victoria is seeing another man. Billy protests that Vikki will want him again. Jack thinks it’s okay to get on with your life. Billy wonders, “Who are we talking about here Jack? You or me?” Austin appears. Jack tells Billy he’s Summer’s husband. Billy gapes. He warns Austin not to hurt her and leaves. Austin tells Jack he’s there to say something that might make him feel better – if he’s incarcerated, he’ll divorce her and let her go. Jack suggests an annulment now. Austin refuses. If by some miracle he gets off, he plans to be with Summer.

Lily throws Hilary in a pool.

Billy ask Kelly why she never told him Stitch was her brother. Kelly ask if he really wants to go over all this again. Billy doesn’t and Kelly walks away.

Wednesday – Victoria is at the hospital about her baby’s paternity test. Victoria is getting it some when she returns from DC. Stitch tells he loves her no matter who the father is.

Nikki calls the hospital to talk to Paul but Christine won’t allow it. Nikki tells Victor she is going to eat. Victor later realizes that Nikki has left.

Hilary tells Devon Lily was right to toss her in the pool. Devon disagrees and offers a room to stay in until her clothes dry. Lilly is not happy. When Neil shows up the twins tell him what
Lilly did and he gets upset. Neil walks in in Hilary and Devon and when Devon leaves Hilary ask him if they go on their honeymoon as soon as possible. Meanwhile Devon shows up at the bar and says he is leaving town.

Chelsea calls Kevin and tells him not to tell Billy anything. Next she calls Anita to come and watch Connor for her.

Christine ask Paul about the child they are supposed to try and have together. Paul tells her after everything he has been through he doesn’t want to try. Christine than blames Nikki for keeping the truth about Dylan from him. When Christine leaves Nikki walks in. Nikki tells him if she had known that the baby was his she would never have let him go.

Chelsea runs into Stitch and she says she wants a truce. Stitch mentions his old high school before walking away. Chelsea smiles.

Victoria tells Billy she will get the paternity test when she gets back from DC. Billy takes her upstairs to see the room he has made for Johnny. Chelsea shows up and starts prattling about them sleeping together. Victoria hears her and says you did what.

Thursday – Jack wants me him and Nick to cut off Summers money. Nick thinks if they do that it will make Summer more determined. Nick warns him that making Summer choose is a bad idea. When Nick leaves Jack makes a call seeking legal help.

Victor comes into Paul’s room and tells them Dylan is ready to be sent home.

In Dylan’s room Ian walks in and Stitch tries to,throw him out but Dylan insist he can handle it. Nikki,shows up,and demands that he leave. After Dylan sides with her Ian takes off.

Dylan goes to see Paul before he leaves.

Victoria is pissed and goes off on Chelsea. Billy tells her she has no say so after she has slept with Stitch. Victoria tells Billy she is taking Johnny with her to see Reed and she leaves. Chelsea tells Billy that they can no longer be friends and that she came to say goodbye. Billy doesn’t want it to,be goodbye and grabs her and kisses her.

Victoria runs into Stitch and tells him all about Chelsea and Billy.

Ian tells Mariah to keep up the good work.

Nikki knows Victor heard what she said to Paul earlier at the hospital. All Victor says is if she hadn’t done what she did they wouldn’t have their children or grandchildren. He and Nikki hug.

Friday- Nick tells Sharon he has been having strange dreams about Summer needing a blood transfusion and Jack not being able to help. Sharon tells him she will keep a eye on Summer for him.

Jack thinks the threat of Summer getting arrested will snap her out of it. Abby comes in NAND explains to Jack why Summer is fighting so hard for Austin. Abby theN tells him he is acting like Victor and ask him if he is ready to live with the consequences.

Summer questions Austin about divorcing her if he goes to prison, Austin finally says he loves her and Summer decides she wants them to have a real wedding in a church.

Nikki is at the courthouse trying to deal with Ian’s nonsense lawsuit. Michael tells her it will be her word against Ian’s. Ian shows up and he and Nikki get into it. When Ian leaves Nikki is afraid of what he has in store for the people she loves and cares about,

Noah and Courtney see Summer and Austin. Summer announces that they are going to get married in a church that afternoon and she wants them there. Noah can’t do it. Abby shows up and tells Summer Jack will have her arrested. Summer is still having her wedding and doesn’t care if any of them show up or not. Abby tries to get Courtney and Noah to help,her stop the wedding.

Kelly informs Jack about summers wedding. Jack says he is getting a arrest warrant. Kelly tells him to stop and to support Summer or he will regret it.

Sharon offers to help Simmer get ready and hands her her tube of lipstick. Summer is shocked and says that is the same color lipstick they found near Phyllis. Sharon flashes back to seeing lipstick roll down some stairs. We get it Sharon is responsible for Phyllis. Can we get on with it?

Austin tells Nick he should walk Summer down the aisle. Nick thinks Jack should do it. Austin is adamant it needs to be Nick.

Dylan and Avery are at her place. Michael shows up and tells Dylan that he is being called as a witness not by Nikki but by Ian.