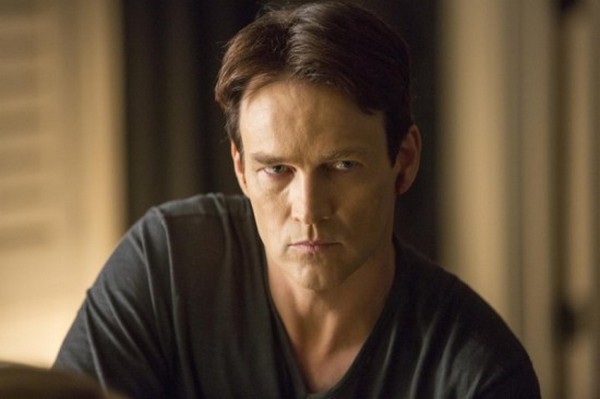 Here’s what happened on True Blood Season 7 episode 4 “Death Is Not the End.”  Jackson (Alcide’s dad) is with Jenny when he gets a call from Sookie. Jackson who clearly can sense Sookie is calling for a reason ask what is going in and Sookie tells him that Alcide is dead. Jason has the misfortune of calling Hoyt to inform him that his mother has been killed by a vampire. The fact Jason has to pretend he isn’t friends with Hoyt ( thanks to Jessica’s glamouring a few seasons back makes this task even the harder). Jason offers Hoyt his sympathies. Hoyt tells Jason his mother always said that she would die if he left. Back to Sookie and Jackson, Sookie wants to know when he can get there and then makes sure he knows to arrive before nightfall. Jackson tells Sookie that Alcide was at his happiest and that he loved her very much.

Sookie is touched but I’m sure is still relieved to a point that she dodged a bullet. If only Alcide could have been so lucky. Jason is still on the phone with Hoyt and tells him to call when he gets into town and someone will come pick him up. After he hangs up Jason breaks down, it kills him that he had to act so nonchalant with Hoyt as if he was just a acquaintance. Although last time I checked I’ve never called a acquaintance Bubba….just saying. Sookie comes tearing in and pretty much demands that Jason suck it up and act like a man who lays down the law. Sam shows up and ask if they are ready. Ready? Ready for what? One of Sookies half assed plans?

Next we check in with the hotness that is Eric and Pam. The plane is headed to Baton Rouge. Eric is not pleased and informs Pam that they will be going to Shreveport instead. Apparently Eric’s soft spot for Willa makes him want to see her one last time before he dies. (I swear if Eric goes at any point this show can count me out for the rest of the season.) Pam really is not thrilled with the idea of going to Shreveport and makes it clear it is not on her list of 100 places to see before she dies. Eric tries to cheer her up and tells Pam it is a cute little trip down memory lane.

Flashback to Memory Lane: Pam and Eric get off a plane in Shreveport and the Majesty of the Authority (which I’m pretty sure is just a fancy way of saying he who does someone else’s bidding) meets them to pass on their sentence to them. The Majesty tells Eric they are to run a small business right there in Shreveport. Eric informs him he would much rather just have the stake to the heart thank you very much. Anyway they are given a tour of their new video store which keeps it’s adult videos in the basement. The Majesty tells Eric that he is the Sheriff of Area number 5 and that he is to always give a rather large kickback to the Authority. He tells them that are being watched, hands them the keys, and them is on his way.

Back on planet Sookie, she along with Jason and Sam stop by and talk with Lisa. Sookie tells Lisa she knows what’s going on is scary but that Arlene is tough and that their mom will be back in no time. Sookie tells her that they are going to get Arlene for them. Sookie really needs to stop jumping the gun it’s annoying. Sookie next wants to see Holly. Andy is in protection overdrive but finally allows it. Sookie goes and sits with Holly and tries to coax her into remembering where Arlene might be. Holly tells Sookie she can’t remember anything and she likes it that way because it was scary as hell. Sookie convinces her to finally let her use her fairie ways to see in her mind. Why has Sookie not whipped this out before? It could have saved her so much time effort and near death experiences. Sookie finds out that Holly was held in the basement of Fangtasia. Holly starts crying hysterically. Sookie tries to make it all better by telling Holly what a great job she did. I’m sure Holly will remember that fondly when she is in therapy.

Sookie announces with the assumption that anyone cares that she will be heading over to Bill’s and they will then “come up with a plan.”

Jason is with Sam who decides he wants to turn his car right round like a record baby right right round round and head to Fangtasia. Jason takes out his pretty little firearm sticks it up against Sam’s head and announces that Sam is out of his damn mind and they will be doing no such a thing, that they will wait for the vampires and that’s that. Sam is beyond the beyond pissed.

Jessica is withering in pain from her gunshot wound. Turns out she hasn’t ate anything in over ten weeks and that’s why she can’t heal. Bill knows it is to protect Adilyn but tells her that enough is enough. Jessica refuses to do anything that would harm her. Sookie comes waltzing in and offers to feed Jessica because I guess all fairie blood is the same or what ev. Jessica won’t bite (literally). Sookie then pretty much gives Jessica the I don’t give a fuck about your problems or hangups I’m not in the mood to watch someone else die and I needs your help speech. Jessica agrees to eat but it’s not going to be from Sookie.

Memory Lane how I’ve missed you. A girl (Ginger) comes in the video store and ask Pam about a video she is looking for. After a brief back and forth Ginger informs Pam she doesn’t believe in vampires. Eric who probably hear her comes in and Ginger almost hits the floor. Ginger immediately wants to know if Pam and Eric are a thing. Pam tells her no and without missing a beat Ginger ask for a application for a job.

Jason tells Rosie that Kevin is dead. Rosie makes him promise whomever did it will pay for it.

Elsewhere Sookie and Bill are discussing the plan. Bill tells her that he isn’t sure if the other vampires will help them considering they are getting nothing in return. Sookie then ask Bill flat out why he is helping her. Bill tells Sookie it’s because he owes her everything. Come on show Alcide hasn’t even been dead a whole episode yet and you are already moving full steam ahead with Bill and Sookie part two? Shame on you. Sookie offers to let Bill have a drink or two from her because she needs him to be strong when he helps her.

Lafayette shows up to see Jessica (more like James). James is still trying to get her to eat. Lafayette gets all bad ass for a sec and takes a pass at her. After what seems like way to much talking she finally gives in, pops her fangs and drinks from Lafayette.

Back over in video store hell Ginger tells Pam they should turn the video store into a bar. There needs to be a platform with a throne atop it. Ginger says Eric needs to see it on the throne because he is sex on fire. Ginger even has a name picked out… Fangtasia. Pam absolutely loves the idea. Pam then walks over to Ginger, apologizes to her and then proceeds to glamour her. Pam plans on telling Eric the bar was her idea and not Ginger’s. Now back to Eric and Pam sitting in the plane. The trip down memory lane has come to a end and Pam has confessed to Eric she stole the idea from Ginger.

Bill is doing what Bill does best which of course is give speeches. This one is being given to Sam, Jason and Sookie. Bill is laying out how they will go about getting Arlene and everyone else back. All of a sudden there is a knock at his door. Enter Eric and Pam. Sookie flies into Eric’s arms and there is just this moment of them holding each other which makes me wish we could be watching Eric and Sookie part two instead. Sookie finally snaps out of it and realizes that Eric is infected. Eric tells her he is kinky at stage one. Pam informs them they are there to get Willa. Eric wants a moment alone with Sookie and what Eric wants Eric gets. Sookie immediately tells Eric he absolutely cannot die on her. Eric ask Sookie how she is doing and she tells him how Alcide died that very morning. Eric puts his arms around Sookie and tells her that he is sorry. Sookie wants to know where Eric has been. Eric tells her he wanted to see the world one last time. Eric wants to know what Sookie has managed to get herself into this time. I really hope she gives him the Cliff’s note version if not we are going to be siting through another season.

While everyone is outside getting ready to head off to Fangtasia Willa shows up. Willa wants to see Eric. When Willa finally does see Eric he tells her that they need to help Sookie much to Pam’s displeasure and disbelief. Eric tells Bill there is another way into the bar. Pam meanwhile can’t get over the fact that Sookie is like a fucking fungus that won’t go away.

Sam shifts into a rat and then into himself at Fangtasia and tells Arlene and company that they are going to be get them out. The look on Arlene’s face is freaking priceless when she sees Sam. Sam shifts again and goes back out.

Eric is doing his best to knock the wall down with his fist but he just doesn’t have the strength. So Bill does it instead. Sam tells Bill exactly where Arlene and everyone else is still alive. Eric wants to go in and fight the good fight but Pam tells him he can ducking forget that, she will go in with Bill instead. When Bill and Pam get inside they realize that Arlene is gone. She has already been taken upstairs for a snack. Pam ushers everyone else out while Bill runs upstairs to see if he can save Arlene. On Bill’s way up to play hero he hears Eric’s voice and realizes he beat him to it. Eric informs the vampires that he is one of the infected and tang he has his own human and is inky looking for sanctuary. The vampires can smell the sweet Honey scent of Sookie’s blood and let Eric in. Eric tells them that he brought some friends, it’s at that moment that fire comes shooting in the bar. Sookie starts screeching for Arlene. Sookie finally finds her and sees that she is about to kick it so she starts frantically looking for a healthy vampire to help Arlene. Arlene is fading fast. So fast in fact that she sees Terry and starts to go with him. Sookie manages to find a vampire named Keith to feed Arlene. Arlene survives and Sookie throws her arms around her. Eric walks in and sees he helped Sookie for what quite possibly will be the last time (damn it show it better not be). Eric breaks out in a smile and then leaves.

WOWser what an episode!  If you are like me and cannot wait for next week’s episode our sister site Celeb Dirty Laundry has already spoiled the episode!