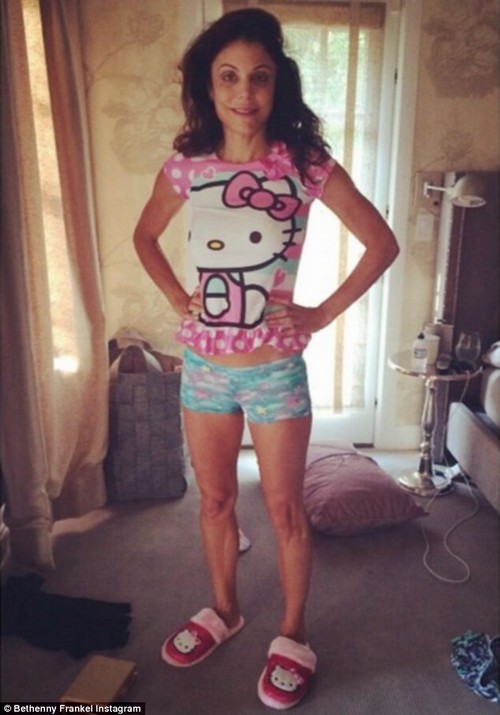 When a young child dresses up as their mother and wears ‘grown-up’ clothes, it’s normal and expected. But what kind of twisted mother would want to squeeze into their four-year-old child’s clothes? Or worse, what kind of woman would even FIT into those clothes?

The answer to both of those questions is Bethenny Frankel. Bethenny decided to post a photo of herself wearing her four-year-old daughter’s Hello Kitty Pajamas on Instagram. She captioned the photo, “This is my daughter’s nightgown and PJ shorts. Think we’re ready to start sharing clothes yet?”

She looks extremely proud of herself in that Instagram shot, but what exactly is she proud of? The fact that she can fit into a four-year-old’s clothes? That’s more of a cause for alarm than pride, in my opinion. No 43-year-old woman should be able to fit into a four-year-old’s clothes, no matter her weight or size. It’s simply unnatural, and disturbing that Bethenny felt the need to share this with us.

Not only that, but it sets a horrible example for all those young girls and women who follow Bethenny’s Instagram account. She’s basically showing off by fitting into a toddler’s clothing, and we’re hoping that most people who follow her on social media will see this as horrifying and not ‘thinspirational’.

Let’s be real – it is horrifying on every level. The fact that a mother would even attempt to wear her toddler’s clothing. The fact that a 43-year-old woman would fit into her four-year-old’s clothes. The fact that she felt the need to share it on Instagram. I’m thinking Bethenny has some deep-seated issues with body image, especially since she seems to think that showing off a pre-pubescent body type is attractive. There were also rumors of her having an eating disorder, and after seeing this picture, I’m more inclined to believe it.