Bradley Cooper And Suki Waterhouse Married In Secret Wedding According To Reports! 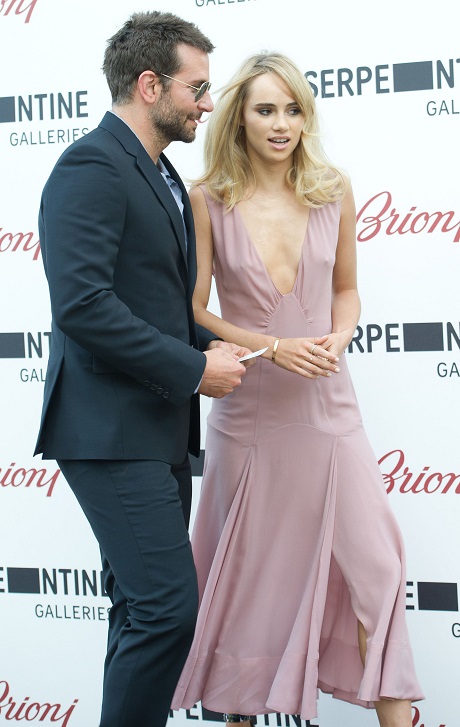 Bradley Cooper and Suki Waterhouse have been dating for more than a year [which is like five years in Hollywood], so it’s not surprising that engagement rumors are starting to crop up. Sources close to Bradley have stated in the past that he adores Suki, and enjoys spending time with her much more than his recent girlfriends, including Renee Zellweger and Zoe Saldana.

Well, she’s uncomplicated, she’s young, and she’s not going to challenge him on anything. What’s not to like? Bradley has a history of thorny relationships when he dates women his own age, so I guess his next step was obviously dating younger.

And now that he is dating Suki, who is seventeen years younger than him, perhaps he wants to commit to the long-term relationship instead of taking the risk that Suki will get tired of him and leave him.

A source even tells Star Magazine, “Bradley and Suki were recently photographed wearing matching gold bands on their left ring fingers. While the notoriously private couple may never give confirmation, pals say a quickie ceremony wouldn’t come as a total shock.”

Again, a quickie ceremony would be nothing new in this town, especially not with a couple that’s gotten so serious so quickly. Then again, would Bradley’s mother be amenable to the idea of a quickie marriage? He and his mother are extremely close, and he’s stated in the past that she wants to see him settle down with a nice woman and have children. While she may accept the fact that he’s dating someone who could be his daughter, I don’t know if she’ll accept him eloping with Suki.