Gwyneth Paltrow Dating New Boyfriend Already – So Much For Her Conscious Recoupling With Chris Martin! 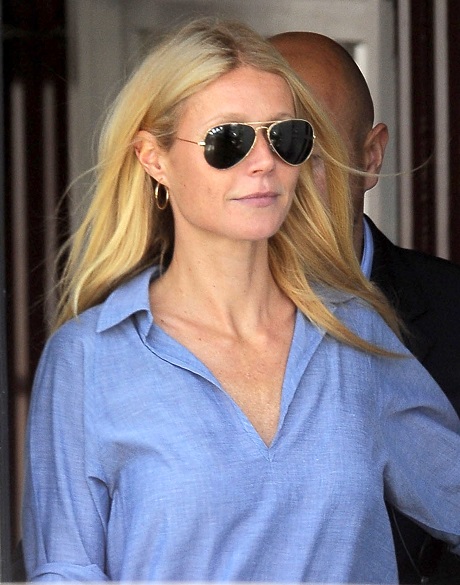 Gwyneth Paltrow and Chris Martin‘s conscious recoupling must have gone down the drain, since Gwyneth has already been spotted with a new man. Page Six reports that Gwyneth was spotted with a ‘hot young guy‘ with blonde hair at the Standard East Village in NYC this past weekend.

Their source explains, “He had curly, shaggy hair and looked like he was in his 30s. I think they may have been holding hands.”

Hmmm… just a week ago, Gwyneth and Chris were acting like a married couple with their kids in the Hamptons. And now, she’s already getting cozy with someone else? And especially someone much younger than her?

It’s possible that this ‘hot young guy’ was Gwyneth’s brother, Jake Paltrow. He has curly hair and he definitely looks like he’s in his 30s. I don’t know who would call him ‘hot’, because he definitely didn’t get Gwyneth’s looks AT ALL. But taste in attractiveness is subjective, and perhaps Page Six’s witness saw him from a distance.

Either way, I don’t think Gwyneth’s the type to operate so quickly. She takes time getting to know her targets, and if she really did have her eye on this random youngster, she would cancel her recoupling with Chris and focus all her energy on him.

Somehow, I just don’t see Gwyneth throwing away her marriage and a chance at a proper reconciliation to hook up with some young-looking hipster. And if you’re going to point out that Gwyneth and this guy were holding hands, then I’m just going to say that Gwyneth and her brother are extremely close and holding hands wouldn’t be out of the ordinary for them.

Then again, maybe Gwyneth has found a new boy toy. Maybe she is getting back together with Chris but is also keeping someone as her booty call/backup. With Gwyneth, it’s hard to tell.