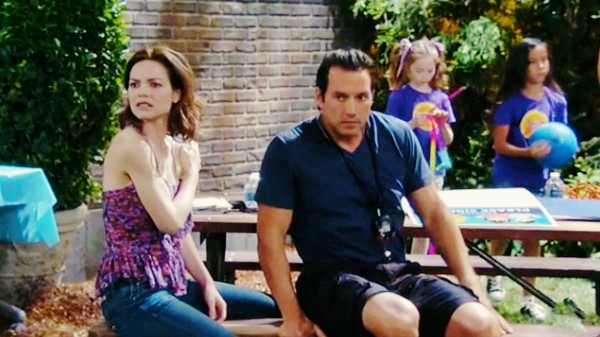 General Hospital Recap and Weekly Review July 14th – July 18th, 2014 is below for your enjoyment!

Monday– Franco calls Carly and tells her much he is enjoying his new job. He apologizes for going all crazy over her and Sonny’s relationship. Speak of the devil he is at her door so she gets off the phone with Franco. Carly stupidly tells Sonny that Franco almost told Michael the truth. Sonny thinks Franco will remain a problem as long as he is breathing.

Maxie and Levi wonder if Nathan is the one that told immigration. Nathan says he didn’t but he did tell Dante about it. They argue a bit and Nathan accuses Maxie of pretending to be someone she isn’t. Maxie takes off. Levi comes back and whines like a baby.

Over at the Floating Rib Dante and Mac are discussing their mutual dislike for Levi when Maxie comes flying in demanding to know which one turned him in to immigration.

Obrecht tells Franco has wonderful he has been doing in the pediatrics ward. Franco is pleased to be helping.

Tracy is waiting for news on whether or not alice can have Rafe’s heart. Meanwhile Kiki and Silas are discussing the transplant. Kiki tells Silas that Rafe is a match for Alice and Silas tells them he is willing to donate Rafe’s heart.

Obrecht signs off on it but then later tells them there is a problem, she can’t allow the transplant because Rafe was taking heroine.

Nina just imagined Rafe waking up. Nina is actually threatening the poor kid until Franco walks in and snaps her out of it. Franco leaves as Silas comes in.

Tuesday– Felix is on the phone with Sabrina when Brad decides to be a douche and interrupt him and accuse him of ruining his chances with Lucas. Felix gets off the phone and argues with Brad. After a bit of back and forth the two think that maybe Lucas is a lost cause and they leave to have a few drinks together.

Meanwhile Dante and Mac irritate Maxie by discussing the pros and cons of Levi. They both deny calling anyone on Levi. Nathan and Levi come breezing in and Maxie decides it was Nathan who did it but he denies it. Maxie doesn’t believe him.

Julian is with Lucas and almost chokes on his beer while Lucas explains the woes of his love life. Before he can get around to telling Julian if he picked Felix or Brad they come in. Lucas is not pleased.

Sonny is still telling Carly that Franco needs to die. Carly isn’t having it. Franco comes in and warns him if he tells Michael he can kiss his ass goodbye.

Jordan has dinner with a very flirty Mickey much to Shawn’s displeasure. Shawn gets angry and tells Mickey to back off, before it can come to blows or in their case shots Sonny drags Shawn away. Mikey wants Jordan to go upstairs with him. She declines but he informs her it’s in her best interest to keep him happy.

Wednesday– Tracy and Michael are worried about how they are going to tell Alice she isn’t getting the heart. Michael tries to get out of Tracy what it is alice wants to tell him but she stays mum and tells him that now isn’t the time. Michael agrees.

Tracy goes in Alice’s room and tells her she can’t have Rafe’s heart but she will find her another one.

Liz is taking care of Rafe and thinks about how his life has been wasted just like Jakes. Sam comes in and Liz tells her she can find another doctor to turn off the machine so that Silas won’t have to do it . Sam tells Liz about Silas thinking Patrick purposely did this to Rafe and how she wants to convince him otherwise.

Nikolas tells Spencer he will take him to see Alice later if he is good with the new counselor. New counselor is Britt. Britt and Spencer are in cahoots together.

Michael arrives at the brownstone to get Kiki to,go to the hospital. Michael tells Morgan that Tracy is telling Alice she can’t have Rafe’s heart. When Kiki comes in they all leave to go to GH.

Molly is remembering that Rafe said someone put him up to running Patrick off the road. But the memory leaves her as soon as she wakes up. Alexis tells her they are taking Rafe of life support and Molly breaks down. Molly wants to be there and say goodbye.

Michael wanders into Alice’s room in time to hear Tracy ask her if they have a deal.  When he questions it Tracy says they were making a deal to find her a heart.

Meanwhile everyone is gathered in Rafe’s room. Molly puts a book under his arm and tells him she is sorry for everything that went wrong. Molly tells Rafe she hopes he knows how much he meant to her. Silas then turns off the machine as tears roll down his face. Everyone hugs each other until Rafe takes his last breath.

Molly is positive remembering what Rafe told her will help bring her closure.

Nina catches Sam and Silas in a hug.

Friday– Nathan is greeted by all his stuff in trash bags outside the apartment. Maxie has also changes the locks.,they talk through the door and she finally lets him to get the rest of his stuff. Come to find out we learn via flashback that the joke known as Levi called immigration in himself using Nathan’s phone. Nathan tells Maxie he will prove Levi is up to no good. Maxie promises Levi she is going to Australia with him.

Britt gets pissed when she finds out Liz will be staying at the park and calls her mommy for help. Obrecht tells her that she would call her back in but she just got off a double and she can’t put the hospital or it’s patients in jeopardy.

Silas is having a rough time and Sam doesn’t do anything in the way of helping him when she champions Patrick.