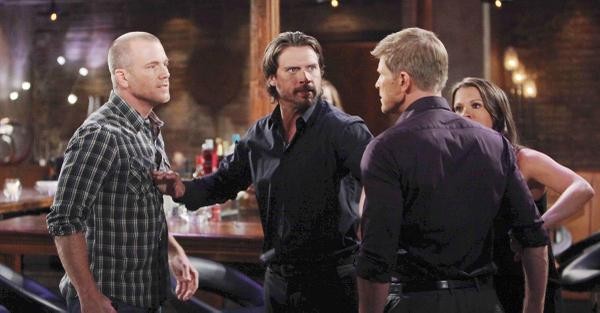 Monday– Kelly is trying to convince Jack to walk Summer down the aisle. Harding walk in to let Jack know they plan in arresting Summer later that day. Kelly is trying her damnedest to get Jack to change his mind.

Sharon is with Summer and still freaking out over the memory of the lipstick rolling down the stairs.

Austin is at the church with Courtney and Noah and thanks them for coming to the wedding. Austin assumes they will be the only ones but in walks Nick. Austin ask Nick if Victor knows. Nick scoffs at that. Nick goes to join Simmer and she ask him to walk her down the aisle. The wedding starts and Jack shows up. Jack tells Summer he isn’t there to stop her or have her arrested that isn’t they type of father he wants to be. Jack wants to walk her down the aisle as well. So now it’s Summer walking down the aisle with Jack on one arm and a Nick on the other. They exchange vows and then rings. The celebration is interrupted when Harding appears and says he is there to arrest Austin for a crime he has committed.

Lily is arguing with Devon about his plans to leave town. Cane thinks he should hit the ground running. Baby shows up to whine about Summer marrying Austin. Devon explains to the little brat that your heart wants what it wants. Hilary walks in and Abby takes off. Lily goes to,get Hilary’s clothes. Lily comes back and tells Hilary that her clothes were lost. Devon goes with Hilary to find them. Neil meanwhile is meeting with a realtor about buying his wife her dream home. Cane appears and tells Neil maybe he should wait on buying a house. Devon and Hilary get up close and personal while looking for her clothes. Devon tells her he is leaving and she begs him not to go. Lilly is elsewhere trying to convince Abby to go in a date with Devon.

Nikki almost takes a drink but instead runs away from the temptation.

Nikki meets with Katherine in the park and unloads everything that’s happened recently. Nikki tells her she will be fine and tells Katherine she loves her.

Tuesday– The cops are about to drag Austin out of his wedding for fraud. Summer begs Jack to help. The cop then informs them that Jack is the one that told them about Austin in the first place. Nick looks pissed. Jack says that Austin isn’t committing fraud. Harding doesn’t seem to be buying it but leaves with the other cops anyway. Austin thanks Jack. Jack tells Austin he is just making sure Summer knows that she has him when Austin ends up breaking her heart.

Jack tells Kelly that it was a year ago he found out Summer was his daughter and today he became her father. They decide to make out.

Mariah is roaming around Sharon’s stuff when Victor shows up and gets angry. Mariah tells him she may still be able to finish the job he hired her for. Victor seems less than interested now that he knows she is friends with Ian. When Nick and Sharon arrive with Faith Nick takes Victor out for a walk. Mariah tries to warn Sharon about Victor but Sharon is to wrapped up in all,the guilt she has been feeling lately. Victor hits the ceiling when Nick tells him about Summer and Austin.

Sharon looks up some information in Phyllis’s accident and says the word stairwell.

Victor meanwhile is looking up information on coma recovery.
Mariah wanders around Sharon’s place and snoops. Victor shows up and growls. He wonders how she ended up being a house-guest. She says everyone got what they wanted… other than him. Mariah says she might be able to finish the job he hired her for. He’s not interested and starts quizzing her about Ian. She insists that he’s a good man. All of this warms Victor’s cockles. Faith, Nick and Sharon arrive. Nick takes the mustache out for a walk. Mariah warns Sharon about Victor. Sharon has been getting weird feelings, like guilt, and she can’t understand them. Outside, Victor gets irate when he hears about the wedding. They chat about Ian and Mariah. Victor has no clue what’s going on and wanders off. Later, Sharon reads about Phyllis on the internet. “Stairwell,” she mumbles.

In his office, Victor asks his secretary for a doctor’s number while he reads about coma recovery.

Cane catches Devon and Hilary doing the nasty. When Devon leaves Hilary Cane goes in and tells Hilary he knows what is going in and she needs to find a way to lessen the damage. Upstairs Devon tells Neil he is leaving town. Neil tells him he needs to be a man and finish his business. Devon agrees with Neil.

Wednesday- Ian goes to Sharon’s with flowers. Ian and Sharon discuss Mariah. Sharon. Beings up all the crap he has done to Nikki. Ian think Victor has underestimated Sharon. Sharon agrees as she shows him out.

Paul goes back to work and is greeted with around of applause. Christine promises Harding that Austin will pay for everything he has done to Paul. Nikki is there in a interrogation room and shows him a journal. She tells him Ian isn’t the only one who wrote about what happened. Nikki becomes livid when she finds out Ian is calling Dylan as a witness. Nikki tells him to use her journal.

Paul calls Christine in to tell her what Nikki is doing. Christine starts bad mouthing Nikki and then complains that she is the reason Paul has changed his mind about having a child with her. Paul tells her he is doing the best he can.

Sharon goes to therapy and tells her doctor she thinks her ticket and the accident are some his related. When Sharon leaves Victor appears.

Dylan is having a nightmare about the shooting and when he yells he wakes up Avery. Avery does her best to get him to calm down. Dylan is upset that Avery has sympathy for Austin.

Meanwhile Jill and Colin are plotting and toasting to it. Colin wants them tombs partners. Jill tells him there will need to be some ground rules first.

Thursday– Stitch is jogging when he runs into Chelsea. At first she ask about Connors cough but then things become personal and they tell each other to stay out of the others business.

Kevin calls Chelsea and informs her that Ben is hiding something. Kevin tells her that the social security number on the real Ben’s death certificate is the same one that is on this Ben’s medical school transcripts. Chelsea tells her that Billy and Victoria need to know the truth. Chelsea agrees.
Kevin calls and leaves a message telling Chloe he is letting her go.

Sharon finds Nick and Mariah laughing about something. Sharon gives him the picture of him and Jack with Summer at her wedding. Sharon then tells Nick that she thinks she is on the verge of a breakthrough. Sharon wants to jog her memories.m

Stitch shows up and Mariah treats him to a beer.

Sharon shows up to talk to Jack and tells him even though she can’t remember her secret she is sure it involves Phyllis’s accident. Jack tells her that she was distraught when Phyllis went into her coma.

Victor meets with Sharon’s doctor to tell her about Mariah living with her and the fact she is friends with a known felon. Victor tells the doctor it is her responsibility to report any illegal activity.

Billy and Stitch get into it….again. Chelsea shows up and pulls Billy away. Later over a drink she tells Billy she needs to be honest with him about something.

Abby cries when she finds out Tracy’s divorce from Steve is final.

Victor questions a doctor about how coma reversing medication is administered to a patient.

Friday- Chelsea tells Billy she doesn’t want to say goodbye either. Stitch tells her she made the right choice. Chelsea lets him know she can’t keep the truth from Billy forever.

Jack brings Kelley flowers and tells her he is going to tell everyone at a family dinner that they are officially together. Stitch comes to see Kelly and they discuss Billy and Chelsea. Stitch wants Kelly to get Chelsea to stop meddling. Jack ask Kelly what is going on with her brother and Kelly tells Jack that her brother is a murderer.

Jill and Colin are chit cheating about insurance fraud.

Cane once again tells Hilary she needs to fix her mess.

Adam can see Chelsea and Billy kissing. While they are on the couch fooling around someone opens the door with a key.

Neil suggest that Hilary help Devon. Hilary has a suggestion of her own and whispers it in Neil’s ear.