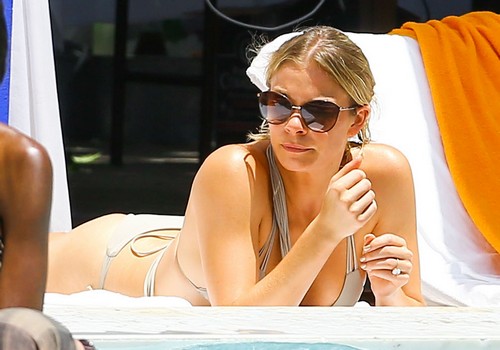 LeAnn Rimes is the epitome of a delusional reality star, and she continues to prove that over and over again. LeAnn thinks that her new reality show, LeAnn and Eddie [on VH1], did very well. In fact, the ratings were mediocre at best, and unsatisfying at worst. For all the press that LeAnn and Eddie [Cibrian] have done over the past few weeks, 374,000 people tuning is a disappointment. In contrast, Brandi Glanville‘s Real Housewives show continuously brings in triple those ratings on a consistent basis.

Of course, LeAnn being LeAnn, she tweeted, “Heard from the head of @vh1 that the show did very well, they are extremely happy w/ the debut and all the social activity from last night. Thx everyone for making the show a success! Let’s keep it up! #LeAnnAndEddie. We adore all of our fans AND our haters! Thank you xoxo.”

You think she’s making up the fact that the head of Vh1 called her? Would the ‘head’ of VH1 even deign to call her? It was probably their assistant or some department head that got relegated to calling LeAnn, and even so, where is the second season renewal? If the show debuted so successfully, why aren’t we hearing about it? The ratings figures were quietly tucked into a Deadline report about all the new shows, and there was no big buzz about LeAnn and Eddie at all. In fact, if it wasn’t for LeAnn’s tweet, I’m sure most people wouldn’t even have known that the show premiered at all. Plus, Deadline deemed the debut ‘soft’, which in industry speak means it flopped.

It’s also hilarious that LeAnn thanked her ‘haters’ for making the show a success as well. Yeah, I don’t think any of these haters watched your reality show, LeAnn. Just because people tweeted about you doesn’t equal ratings, as we’ve already seen.