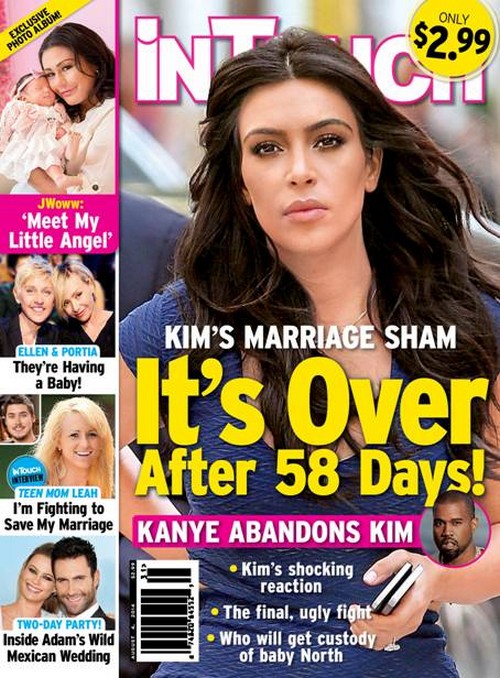 We all kind of knew that Kim Kardashian‘s marriage to Kanye West was going to be a temporary situation, right? They have been married for about 58 days now, give or take a few and already things are bad. The kind of bad that prompts Kanye to decide to relocate- to Paris permanently- alone. According to the Aug. 30th print edition of In Touch magazine that decision led to a huge battle between the couple, one that Kim likely lost. Kanye may have a GPS on her phone but Kim seems to rarely know where her new husband is these days.

Things between these two were never great, both Kim and Kanye have spent most of their time together planning for the next big thing, their baby, the wedding, etc. When left with nothing to plan they rarely even want to be together, or at least he has made it abundantly clear that while he publicly praises Kim, actually having to spend real time with her is a totally different story.  Just this week Kanye admitted that they are already struggling to communicate, not a great disclosure for a married couple of two months!

Is Ellen DeGeneres going to cave in and allow Portia de Rossi to have a baby? The two were reportedly in a knock down drag out fight over the issue before Portia was hustled off to rehab. Rumor has it that Ellen cheated with a mutual friend of theirs’ so perhaps part of staying together might include having a child. In Touch has all of the latest on the status of their marriage and also the inside details on Maroon 5 frontman Adam Levine’s wedding to Behati Prinsloo. Did any of us expect that wedding to really happen? Adam has always been such a notorious player, do you believe that his new wife has actually tamed him? Tell us your thoughts in the comments below!