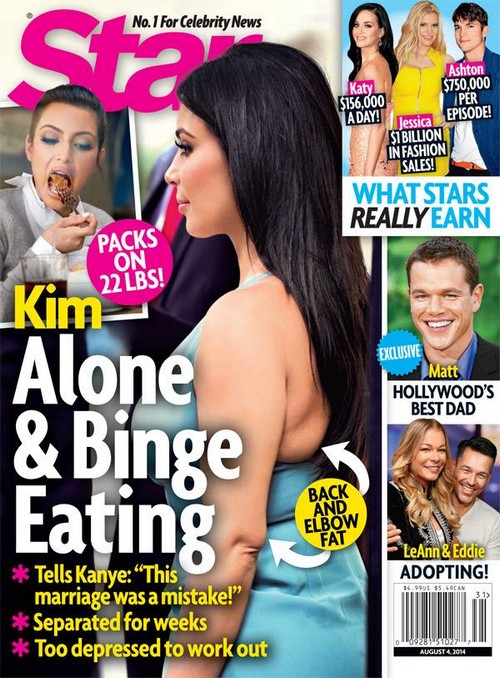 It’s already fairly common knowledge that Kim Kardashian’s third marriage has hit the skids even before all of the thank you notes for those over-the-top gifts have been mailed out. This actually seems to be Kim’s pattern- get married and then instantly regret it. She whipped herself into killer shape in order to fit into her gown but as her relationship is crumbling it looks like Kim is turning to food for comfort.

According to the Aug. 4th print edition of Star Magazine that is 22 extra pounds of comfort due to binge eating. Poor Kimmie got herself together for her man and now Kanye has announced that he is heading for Paris where he will permanently be living, without his new wife or daughter. Talk about an emotional wallop when once again your man needs to be an ocean away from you, no wonder Kim is indulging in the fatty foods like she did while pregnant!

After months of supposedly trying to get pregnant LeAnn Rimes may instead be adoptin g a baby. My guess is that this choice is a whole lot less about providing for a child in need and more about her vanity. LeAnn has been terrified about Eddie Cibrian cheating on her since day one and we all know that he likes his women stick thin. Have you ever wondered how much your favorite stars really earn? Well Star Magazine has done their homework and is dropping figures in the Aug. 4th print edition so you’ll want to grab a copy. In the meantime, how long do you think that Kim and Kanye’s marriage will last? Tell us in the comments below!