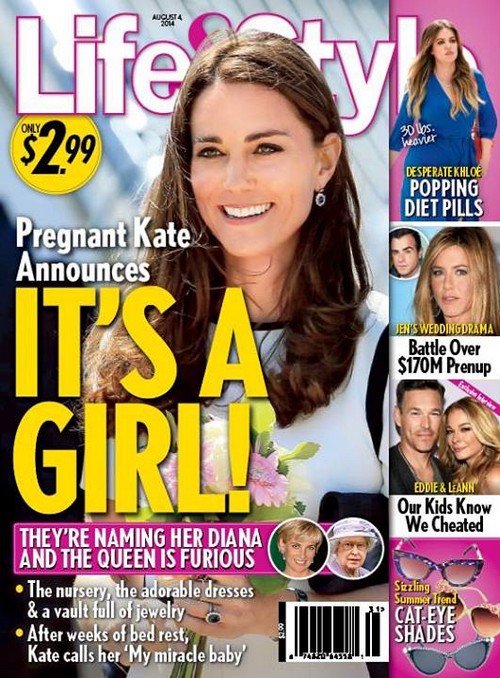 Those rumors about Kate Middleton being pregnant just aren’t going away now are they?  If the most recent ones are to be believed then there should be an official announcement coming any day now. What is interesting was her oldest friend, Jessica Hay telling the Australian press that Kate is indeed expecting a baby, that little nugget seems to make it all a whole lot more believable I think. According to the July 30th print edition of Life & Style Magazine Kate and Prince William already know that she is carrying a daughter and they intend to name her Diana.

While naming a daughter after William’s late mother actually makes an enormous amount of sense, the mag says that Queen Elizabeth isn’t so thrilled about the idea. Of course there has to be a bit of royal drama behind the scenes before the baby is born and this time it’s not even coming only from Camilla Parker Bowles!Khloe Kardashian seems to have gained an awful lot of weight back since dating French Montana and she finally has decided to take some desperate measures to whittle herself back down. Khloe didn’t mind gaining at first to please French who likes his women really curvy, but she’s tired of her clothes not fitting. According to L&S, instead of heading back into the gym like she did in order to be declared “the hottest Kardashian” last summer, Khloe is popping diet pills. Not the best way to drop those pounds and her sisters are worried.

I’m not exactly sure why VH1 gave LeAnn Rimes and Eddie Cibrian their own reality show but the couple is making the interview rounds to promote it. Eddie is admitting that he told his young sons that he kissed a woman other than their mommy and that’s why he and Brandi Glanville split up. Do you wish Eddie and LeAnn would just disappear and stop the attention seeking? Tell us your thoughts in the comments below!