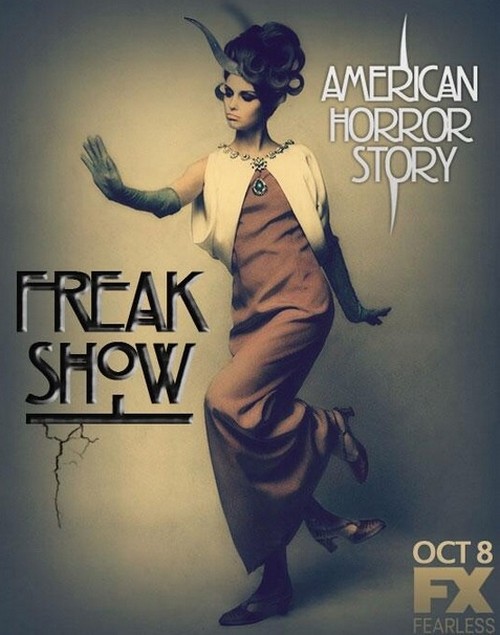 Are you guys semi-obsessed with American Horror Story? It returns every season spinning in a completely different direction with a laundry list of new characters that are always guaranteed to keep you on the edge of your seat. As always a few previous cast members are returning and this season’s Freak Show is already destined to be the kind of thing that you watch with your eyes half covered. During the show’s panel at Comic Con on Saturday it was revealed that Emma Roberts will be joining the cast of misfits as “Maggie”.  Also returning from previous seasons will be Jessica Lange, this time in the role of Elsa Mars who is a German ex-pat that is in charge of the carnival of crazies.Kathy Bates’ character is named Ethyl Darling and so far we know nothing more than her name. Fans are speculating that she could possibly be a bearded lady but as of now it’s just speculation. Angela Bassett has been cast as Desiree Dupree  and Evan Peters will be playing Ethel’s son, Jimmy Darling. Michael Chiklis was cast as Dell Toledo,  Ethel’s husband. And Desiree’s ex. Chiklis’ character is rumored to be a strongman. Sarah Paulson will play conjoined twins Bette and Dot Tattler, and Ann McKenzie is listed as a character named Eudora Tattler.

On Saturday it was also announced that John Carroll Lynch will be joining the cast as the main villain this season but no other details were given just yet. Are you excited to see how Ryan Murphy’s latest vision comes to life onscreen in American Horror Story Freak Show? Tell us your thoughts on the casting so far in the comments below!