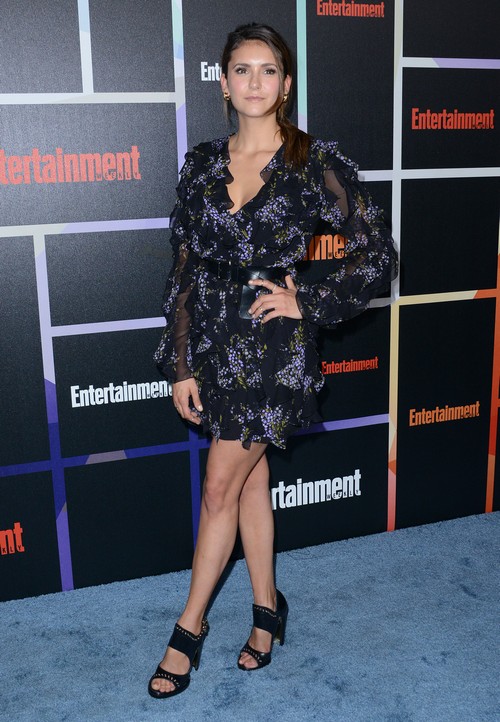 Enter, the most discussed love quadrangle of Ian Somerhalder – Nina Dobrev – Ben McKenzie – Nikki Reed since the infamous situation involving Angelina Jolie, Brad Pitt, Jennifer Aniston, and Justin Theroux. There is a huge difference between both scenarios, but Nina and Ian are causing quite a hubbub in their fandoms by their respective hookups.

While Ian has gone public with his relationship with Nikki Reed, Nina is instead doing her seeming best to hook up with every single actor at Comic-Con. She was spotted flirting with Orlando Bloom, and then reportedly had a hookup with Ben McKenzie. Is this a response to Ian’s new relationship, or is she just taking full advantage of her 20s and having fun?

Her rumored flings did start before Ian went public with Nikki, and we’ve been hearing about Nina’s various hookups for the past few months, at least. However, sources close to Nina have been stating that she’s actually interested in dating Ben, and wants to take things slower with him. Uh, and I guess hooking up is the way to take it slow?

Anyway, there was really no outward signs of jealousy or resentment between Nina and Ian during their Comic-Con panel. Both were the epitome of professional, even if they were secretly harboring angry feelings towards each other. But again, sources admit that they may have stayed professional, but they’ve been telling close friends about their real feelings on the matter. Nina is upset and jealous that Ian would be so cavalier in flaunting his new girlfriend, and Ian is reportedly upset that Nina has been so blatant with her flings.

Whether we believe these stories or not is different. Do we? Ian and Nina are professional actors, and they broke up more than a year ago. They might have actually moved on by now, right?