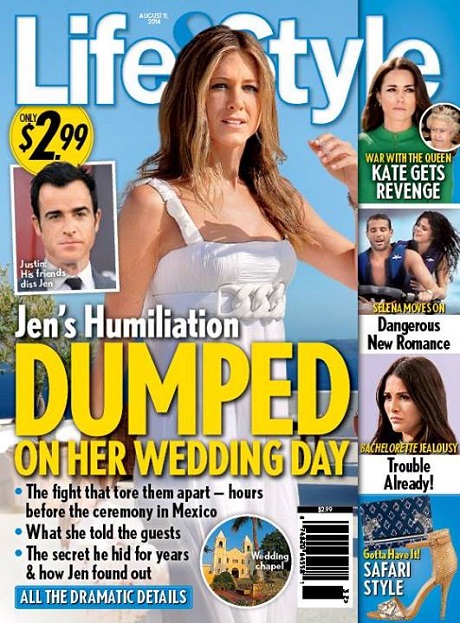 Poor Jennifer Aniston is like the unofficial poster child for women who never quite pin down the perfect family life. We watched her marriage to Brad Pitt crumble and since then Jen has burned through one version of Mr. Wrong after another. It looks like Justin Theroux is now joining the list of guys before him that dated and eventually dumped Jen. The couple got engaged nearly two years ago and I think most of us had believed the rumors that they had broken up until they were spotted on a red carpet together several weeks ago. It was the first time that they were together for an event in about 9 months and shortly thereafter there was a rumor that the couple would be getting hitched in Mexico.According to the Aug. 11th print edition of Life & Style Magazine that wedding was indeed scheduled to happen within the last few days but a huge blowout between Jen and Justin caused not only the wedding to be shelved, but the relationship to be over. Supposedly Justin has kept a zinger of a secret from Jen and luckily for her, she found out before walking down the aisle. After a huge fight Justin actually dumped Jen once and for all. These two have been off and on for so long it’s hard to tell what will really happen but as of now, the engagement is certainly off.

ABC just clued viewers in to the fact that Andi Dorfman accepted Josh Dorfman’s marriage proposal this week but already there are reportedly problems between the couple. Apparently Andi’s jealousy is causing serious fights and both of them are starting to wonder if they rushed into an engagement. Speaking of rushing into things, Selena Gomez seems to be hopping from one bad boy to another. Since her relationship with Justin Bieber has hit the skids, Selena has moved on to another shady character and Life & Style has all of the details.

Could there really be animosity between Kate Middleton and Queen Elizabeth?  According to the latest issue of Life & Style Magazine not only are they feuding, but Kate has apparently gotten revenge on the Queen. What do you think that the real issue is here? Tell us in the comments below!