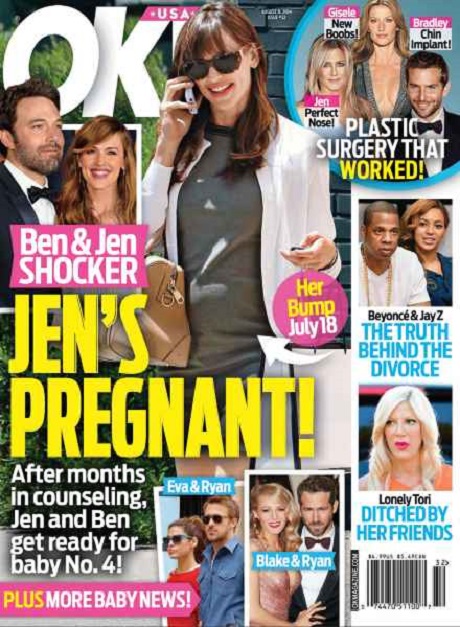 The last time that we discussed Jennifer Garner it was to dish on some of the trouble in her marriage with Ben Affleck. The couple has been rumored to have had issues for years now. Some of Ben’s old addictions have flared up and while Jen is a great mom, she didn’t intend to give up her career to be one. The fact that she hangs with the kids while Ben’s career continues to explode has left her with a bit of obvious resentment. The fact that Ben is on location for long periods of time has also caused issues that sent these two running for counseling.According to the Aug. 11th print edition of OK Magazine it looks like Jen and Ben may have worked through their issues enough to be expecting a fourth child. Jen has kind of cringed in the past at the idea of another baby but she has also said that Ben would love another one. Do you think that they planned another bundle? Or will this be in essence a band aid baby- an attempt to fix their marriage with the hopes that a new child will bond them and remind them of why they got together in the first place?

Beyonce and Jay Z’s marriage has also been on shaky ground for months now. Rumor has it that they will be splitting up once the complete their joint On The Run tour. OK Magazine has all the latest details on their messy split. Speaking of messy, I think no other marriage has been on display quite like Tori Spelling’s. True Tori told us all about the problems plaguing her union with Dean McDermott. Unfortunately it also has left Tori feeling pretty alienated from all of her former Hollywood friends. Do you blame Tori’s former pals from scattering? Tell us your thoughts in the comments below!