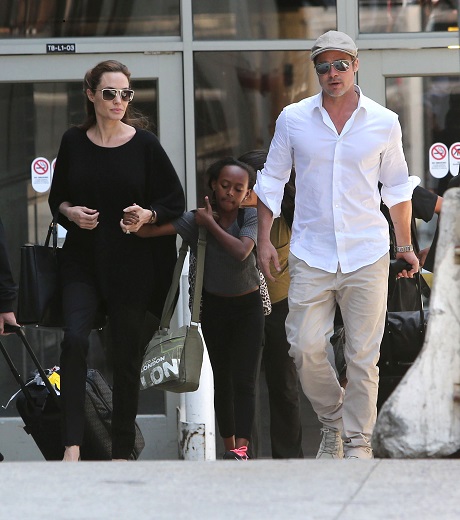 Nobody can ever match Angelina Jolie and Brad Pitt on pure gossip. They’re ‘Brangelina’ for a reason, and they continue to prove that, over and over again. For example, Angelina recently revealed that the couple exchanged love letters while they were apart, during the time when Angelina was filming Unbroken in Australia and Brad was filming Fury in England.

Angelina explained, “Brad was supportive from a distance and it was quite romantic in a way. We decided to be of that time when we could imagine he was in the European theater and I was in the Pacific theater and we wrote hand-written letters to each other that were very connecting for us, thinking of the people that were separated for months if not years at a time back then.”

OF COURSE they did. I mean, this is Brad Pitt and Angelina Jolie we’re talking about. They already romanticize everything they do together, so of course they would manage to spice up their romance when they were apart for that long. Plus, does anyone get the feeling that Angelina’s hinting at some extra sexy stuff when she discusses these ‘hand-written letters’?

Anyway, the reason Angelina’s being so candid all of a sudden is because she’s going into early awards season campaigning for Unbroken. Expect the movie to be a major part of the conversation come December, and you can bet that Angelina and Brad will be talking a lot more about their private life when it’s time to promote the movie.

What do you guys think about Angelina’s comments? Let us know your thoughts in the comments below.