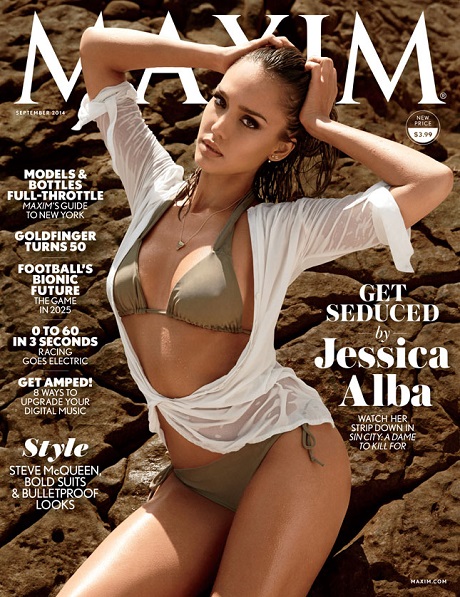 Jessica Alba is currently promoting the completely pointless Sin City sequel, and she decided to pose on the cover of Maxim magazine to promote the movie. And, clearly, Jessica forgot that she was speaking to the wrong audience because she spent the entire interview discussing body image and self-worth. Uh, Jessica, this is Maxim magazine. Nobody reading this cares about your views on body image.

What she says is worthwhile, as she explains the pressure that female Hollywood stars are often placed under – especially when it comes to their bodies and their beauty.

She adds, “If you put your whole identity behind this business, it’s brutal. It chews you up and spits you out; it spits out a lot of people. I definitely feel like I tackled something and came out the other side. Everything that led up to all of this was worth it. I’m really comfortable in my own skin. And I’m not apologizing for myself.”

While Jessica may be comfortable in her skin and happy with herself right now, her career certainly has stagnated, hasn’t it? Sin City is probably her first high-profile release in a few years, and even though Jessica will blame that on taking a break and spending time with her kids, it’s her attitude and lack of acting ability that caused that.

Jessica had a great start to the business, but her rumored ego and behavioral issues caused gossip about the difficulty of working with her. And it’s not like she has the talent to back up the bad behavior, so her career went adios. She probably thinks that all of these sexy photoshoots are going to fix that, but at a certain point, there’s just no coming back.