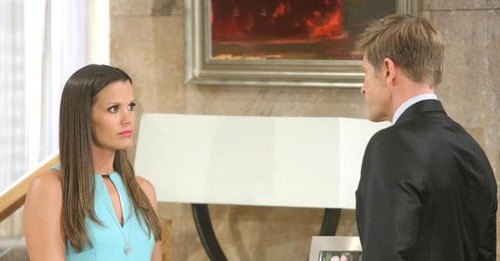 The Young and the Restless weekly review and recap for the week of July 28th – Aug 1st, 2014 is below:

Monday – Billy is getting a talking to from nick about his shady dealings when it came to Ben ans Nick tells him Victoria will never want him back. Billy thinks Nick is full of it.

Sharon walks into the middle of Nick and Billy’s yell fest to tell Nick she will be getting home late.

Cane sneaks off and leaves a message for Devon telling him “how Hilary is his step-mom” for the billionth time.

Jack and Kelly are having a hell fest of there own over trust. Jack tells at Kelly that he loves her. Kelly is floored but still doesn’t see things Jack’s way so he leaves. Kelly Lily she no doubt just chased off the best thing that has ever happened to her.

Devon is conveniently stuck out in the middle of nowhere in his car he claims broke down, also he has no hound signal. Hilary calls his bluff and decides she will walk but comes running back when a cow moos at her,yup she is afraid of cows. While Devon tries to fix the car Hilary gazes up at the stars. She starts talking about dancing and soon enough her and Devon are doing just that.

Ben goes to Victorias and begs her to let him explain. She refuses to let him in her house.

Victoria heads over to the hospital and tells her doctor to run the test she want to know the result so she can decide who finds out and when. She has second thoughts and says to hell with it she doesn’t need either man in her life.

Kelly sneaks into Jack’s room and tells,him she loves him and then jumps into bed.

Nick and Mariah are talking over sandwiches when Sharon comes home. They head off to bed while Mariah watches.

Tuesday– Sharon wakes up form a nightmare of Nick living her. Nick reassures he loves her and it won’t happen.

Victor calls to check on the docs arrival at the airport. When the doctor arrives he tells Victor about his success of getting patients in comas to respond. Victor wants Phyllis in the doctors trial. The doctor needs her families consent.

Tyler and Abby argue some more about Mariah.

Austin tells Mariah he is looking for a job. When Nick shows up he offers to give Austin a interview. Nick is impressed with Austin’s background…before the shooting …and hires him.

Nikki goes to see Summer to complain about her marrying the guy who shot Paul.

Sharon gets a flashback of entering the hospital lab and shivers. Her therapist tries to hypnotize her but it doesn’t work.

Sharon tells Mariah she has the flash of a memory. Nick overhears and ask her what she remembered.

Wednesday– cane and Lily wonder where in the hell Devon and Hilary are. Abby comes in and lily starts trying to set her up with Devon. Abby protest and says they are just friends.

Hilary and Devon shoe up at Neil’s and find out he has contacted the police about her being missing all night. They explain what happened and Devon leaves. Neil kisses Hilary and she imagines Devon. She jumps away from him and gets ready for work. Neil gets a call and is excited to surprise his wife.

Victor shoes up at Summers and gifts her with a Pearl necklace..a gift all the women in the family get upon marriage. Victor talk to her about Phyllis and then leaves looking lost in thought.

Sharon is explaining she can’t put the pieces of the puzzle together just yet (can we please stop dragging this out) . Sharon thinks maybe she should visit Phyllis but then changes her mind. Jack needs her to go to Chicago.

Devon gets a talking to from Cane about where he was the night before. Having had enough of Cane Devon finally ask Abby out.

Sharon and Nick decide to have ice cream in bed.

Thursday-Billy tells kill he is confident Victoria will want him back especially if the baby is his.

Kelly and Stitch are talking and he tells her he doesn’t blame her for his secret coming out. Jack shows up and he and Kelly have another little disagreement.

Avery and Dylan are also discussing Stitch and all his lies. Victors I shows up and ask Avery if Billy or Stitch would have the right it force her to take a paternity test. Avery tells her yes.

Chelsea leaves Billy a message asking him what he did with the information she gave him on Stitch.

Kevin gets into trouble for taking breaks. Harding wants him to find out who hacked the hospital database.

Kelly and Jack have sex and afterwards he sits and thinks about telling Kelly he loved her while smelling Phyllis’s perfume. Kelly knows he is feeling guilty.

Billy lets Chelsea know he dropped the dime on Stitch. Chelsea tells Billy she kept quiet about it because she didn’t want him to leave her.

Friday– Jack tells Kelly the only way he will be able to move forward is to go to Georgia and tell Phyllis he is leaving her.

Hoarding tells Michael he is arresting Kevin for stealing the hospital file. Michael accuses Harding of setting Kevin up.

Stitch tells Victoria he wants her to trust him. Victoria isn’t buying it.

In Georgia Phyllis’s doctor is taking notes about Phyllis being a suitable candidate for the trial.