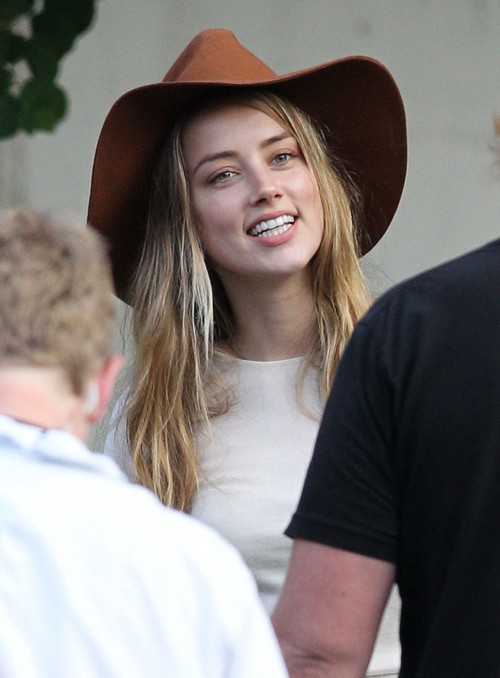 Amber Heard and James Franco are reportedly getting close on the set of the Adderall Diaries, which is making Johnny Depp jealous. At least, that’s what a new report from the National Enquirer claims. I’m not inclined to believe it though, because Johnny just looks too high to care. The dude’s still clearly in the throes of his mid-life crisis, and that includes apathy towards his fiance, his family, and his career. Look at his movie choices over the past two years – they’re horrible!

Plus, he’s spending less time with his kids, he broke up with his partner of so many years, Vanessa Paradis, and he’s with someone who’s half his age. And even that, he doesn’t seem all that invested in. Sure, he claims he wants more kids and wants to get married as soon as possible, but who else gets the feeling that he’s just marrying Amber out of obligation – not because he really wants to?

Plus, the Enquirer’s report claims that Amber’s flirting with James is giving Johnny the perfect excuse to call off the wedding. Apparently, Johnny was already hesitating to go forward with the marriage because his children aren’t too fond of Amber. And now, he has an even better excuse – Amber might be cheating on him with James Franco! See, the story might seem silly, but we have to remember that Amber and Johnny met the same way as well. Amber was with someone, and Johnny was with someone, and they found each other on the set of the Rum Diary. So who’s to say that Amber and James won’t re-enact the same thing while filming their own movie? Besides, if Johnny’s looking for an excuse to say single, he’s finally got it.