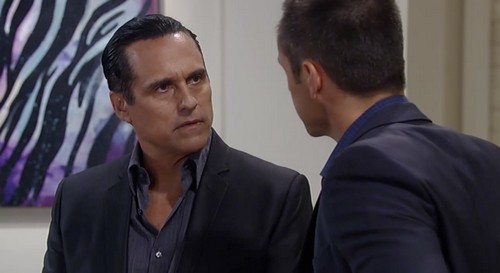 General Hospital Recap and Weekly Review July 28h – Auugust 1st, 2014 is below for your enjoyment!

Monday– Shawn grabs Jordan and kisses her right before Mickey walks in the room. Mikey is standing outside and he tells “Luke” that someone is making a special delivery that is sure to keep Julian in line. Mickey walks in and catches the two of them together. Jordan covers by saying Shawn shoved his way in. Shawn leaves. Jordan tells Mickey she will do whatever it takes to meet the big boss man. Mickey makes a drink while Jordan hides a recorder in the headboard. Mickey takes off his gun and the start kissing, they fall into the bed but them Mickey notices the recorder and ask her what it’s all about.

Julian and Ava are drinking over pulling one over on Sonny. Julian ask her where her proof is and Ava explains that AJ recorded his own murder which Sonny has on a flash drive. Ava also tells him it has proof of her admitting to shooting Olivia. Ava thinks Carly has a copy but is sure she can work the Franco hates Sonny situation to her advantage. Ava makes a call and tells Julian the problem is solved. Mickey sends Julian a text telling him he hopes his family sleeps tight.

Ned tries his best to make Olivia feel better and he ask her to have a drink with him. They go in the bar and Olivia spies Carly with Franco. Olivia walks over and tells Carly to throw out Sonny but she refuses. Olivia gets upset and accuses Carly of always taking Sonny’s side and then warns Franco eventually Carly will go go back to Sonny. Ned drafts Olivia off. Franco points out he isn’t the only one that thinks Carly still loves Sonny. Franco and Carly argue a bit. Franco and Carly kiss and he gets on the elevator by himself , two guys with guns are waiting. Olivia is on her way to a buzz while drinking with Ned.

Sam wants Sonny’s help in bringing Nina down. Sam tells him how wires everything has gotten and that she and Silas broke up. Sam thinks Nina is the one who told and wants to see his security feed to prove it. All she sees is a door crack open but she is confident it was Nina and tells Sonny to do something about it. Sam leaves and Shawn shows up angry that Jordan was going to sleep with Mickey.

Nina fixes Silas a drink with something in it while he talks about breaking up with Sam. Nina reminds him Sam betrayed him. Silas soon passes out. Nina quickly realizes she can’t get him to have sexy and get her pregnant if he is knocked out. Nina gets him to wake up and tells him she needs help to the couch. Silas picks her up and ends up falling on top of her. Nina attempts to,get a kiss. There is a knock at the door but the two ignore it. Sam comes breezing in and catches them fooling around.

Someone puts a bomb in Alexis mailbox. Alexis later shoes up with Molly , TJ and Danny. Molly wants to head to the mailbox but Alexis tells her she already got the mail. Julian called Alexis but she was forced to ignore the call. Later she calls him back and they talk about how much they miss each other. The bomb explodes a short time after.

Tuesday– Nina ask sam what she is doing at Silas’s since they broke up. Sam had wanted to tell Silas something but it no longer matters. Sam leaves and Silas is to drugged to to after her. Nina thinks it’s a good thing and tries to get another kiss. Silas shoves Nina away and heads to bed.

Julian calls Alexis and a tremors to warn her to get out of her house.
Over at Alexis’s house things are not good. The bomb hit the propane tank on the grill and caused a fire in the house which called the whole thing to go up. Julian tries to run in but gets knocked down by a explosion. When he wakes up he ask a firefighter about the situation. The firefighter tells him if anyone was in there they didn’t survive. Julian falls to the ground. Julian hears Alexis and runs and scoops her up in his arms. Alexis lets him know everyone is safe and sound at Sam’s house. Sam shows up just then and Julian tells her to take care of Alexis and he takes off. The firefighter tells Alexis the explosion was no accident.

Franco is with the two guys in the elevator.

Olivia is on a roll smack talking Carly to Ned.

Shawn is still bitching to Sonny about Jordan. Sonny reminds Shawn they have to go through Mickey to get Julian. But if Shawn needs to handle mickeys Sonny supports it. Shawn leaves and Carly shows up next of course. Carly bitches to Sonny about. Olivia making her look like a fool. Sonny has his own problems Ava is now being taken care of by Julian.

Ned is trying to sober up a very drunk and crying Olivia. After a few attempts a movie and a blanket it works. Olivia thanks him.

Mickey is about to kill Jordan who he finds out through her own recording is a FBI agent. Shawn shows up,but leaves before he enters. Jordan and Mickey tussle and Jordan comes out victorious with the gun in her hand. Jordan suggest Mickey just tell her who his boss is. Speaking of he calls Mickey just then. Mickey goes to answer but Julian smashes the door in and shoots Mickey. Jordan is to shocked to do anything.

The goons drop Franco off at Ava’s who tells,him all she wants is the recording she is sure that Carly has. She promises Franco if he does it Sonny will,no longer be a problem for him. Franco refuses. Ava is sure he will come around soon enough.

Wednesday-Maxie wants to be her maid of honor. Lulu refuse on Nathan’s behalf. Lulu points out that Maxie has a thing for him as well. Maxie becomes upset and says she is tired of people second guessing her decisions and she says she loves Levi. Lulu back tracks and says she will do it.

Tracy calls “Luke” and tells him alice is dying and she can’t tell anyone and needs someone to help her. Ned suggest Tracy just tell the truth. Tracy thinks it will just do more damage. Ned says he will tell alice then. Tracy says she will do it.

Alice wakes up,in her hospital room. Michael and Kiki are already there and Morgan shows up with a surprise for her in the form of David Otunga. Alice thinks she is in heaven. David tells her she is the reason he became a wrestler. Soon everyone but Morgan leaves. Alice begins to cry and tells Morgan her heart is full of love. Morgan tells her she will get a new heart.

Julian explains to Jordan about the explosion at Alexis’s house. Jordan tells Julian things were getting ugly with Mickey. Jordan wants Julian’s gun and tells him she will cover for him. Jordan has Julian leaves and then she calls the cops. Anna shows up and they act like the worst of enemies but once everyone is gone Jordan tells Anna what really happened. Mickeys phone begins to ring and hoed an answers. Jordan tells Anna it sounded like Luke Spencer. Anna scoffs at that. Next they get a call to inform them Mickey is brain dead.

Alexis and Sam head back to Sam’s place. Alexis gives Molly the bad news about their house. Molly is understandably upset. When Julian shows up Molly takes off. Alexis ask Julian where he went. Julian tells her the person that caused the explosion is not a problem any more.

Nathan catches Nina standing up and she makes him promise to keep a secret. Soon they are talking about Maxie and Nathan. Nina realizes he loves Maxie and tells him to go after the love he wants.

Thursday-Josslyn aggravates Franco about getting the last of the cereal. Carly aggravates him about disappearing to tell Michael about Sonny. Franco tells her that he did no such a thing. Josslyn meanwhile is giving Spencer the cereal. Franco is going through Carly’s lapTop while Spencer watches him.

Tracy ask Liz to tell her what’s going on with Mickey. Liz refuses to tell her anything. Brad happens by with the file and after a but of banter Tracy grabs and finds out that Mickey is a match and was drug free.

Julian fills Ava in on what happened at Alexis’s house. Julian sends Ava away and Skype with “Luke”. They exchange threats but Julian won’t back down he tells “Luke” to stop adding heroine to the product and ends the call. When Julian leaves Ava sneaks over and makes a Skype call to “Luke” all of her own.

Spencer calls Britt and tells her to get back with his dad fast because he can’t hide forever.

Anna and Dante discuss Jordan saying she heard “Luke” on the other end of the opine. Dante also doubts it and Anna ask him to go about a way of proving “Luke” is innocent. Nikolas shows up and yells at her for not looking for Spencer. Anna tells Nikolas to zip it lock it and out it in his pocket.

Dante goes to the hospital to ask Tracy about “Luke”. Tracy tells him their marriage was annulled and she doesn’t no where he is. As soon as Dante leaves Tracy calls “Luke” and tells him. Liz shows up and tells Tracy Mickey was not a organ donor.

When Nikolas gets home Brad is there and Britt tells him they all need to talk about bringing Spencer home.

Friday– Sam is flashing back to walking in in Silas and Nina. Patrick shows up and they talk about the explosion at her moms, Sam then tells him about her suspicions involving Nina. Sam wants to what Nina is up to. Patrick tells her he wants to help.

Silas comes tumbling out of his room and all he remembers is kissing Nina. The doctor also remembers that Sam walked in. Nina thinks Sam knows now that they belong together. The play poker and Nina decides to stand up.

Nikolas is not happy that Brad is at his home. Nikolas walks away. Britt feels guilty about what her and Spencer are doing. Brad tells her to find him then.

Spencer makes himself known to Franco. Franco knows he is the missing kid and Spencer tells him he better not tell anyone then tells him to stop fling after Uncle Sonny.

Sonny comes in the gallery and has two guys follow and disarm Julian. Julian tells,him he knows he killed AJ. Sonny threatens his life and then tells him he better make sure Ava stays in town. Sonny has the two guys take some art.

Ava surprise “Luke” by showing up in his screen. Ava suggest they work together. She tells him she has something on Sonny but she wants his word nothing will happen to her if she spills. “Luke” ponders it as he rubs his chin.