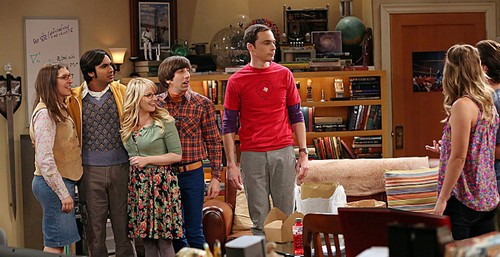 Jim Parsons, Kaley Cuoco, and Johnny Galecki are going to be raking in the cash by the time The Big Bang Theory ends its run. Actually, correct that. They’re raking in the cash NOW, where their re-negotiations have reportedly led them into Friends territory, where they will each be making almost $1 million an episode. Let me repeat: $1 million PER EPISODE.

That’s not only $24 million per year, but that fee doesn’t even count all their back-end deals, profit participation, merchandising, syndication income, and residuals. According to Deadline, the trio could end up making almost $90 million [each] over the next three years. The trio is contracted for Season 8 to Season 10, and after those three years are up, they could easily end up making EVEN MORE if they agree to a few more seasons.What’s actually even more astonishing is that the amount the network and studios will be paying these three is actually nothing compared to the profits they make off this show. I mean, they make ridiculous amounts of money with The Big Bang Theory, and it’s one of the few shows that actually contributes to Time Warner’s bottom line in a significant way.

In addition to increased salary and participation on the show, the trio has also gotten production deals with the studio, with Jim Parsons’ agreement including film, TV, and theater. But WBTV should give these actors whatever they want, including a mansion dripping with gold, because the show is reportedly poised to net the studio over $1 billion in profits. Yikes.

While Parsons, Galecki, and Cuoco have been negotiating their own salaries separately, the supporting players Kunal Nayyar and Simon Helberg, are also looking to raise their own salaries. They were making $100,000 per episode after their 2010 negotiations,  but with the way the main trio’s salary has increased, I’m guessing at least half a million dollars will be the requirement for Nayyar and Helberg.

What do you guys think about these salaries? Do you find them justified, or just ridiculously extravagant? Let us know your thoughts in the comments below.

Prev Next
32 Comments
Leave A Reply
Cancel Reply
For All The Alaskan Bush People News!