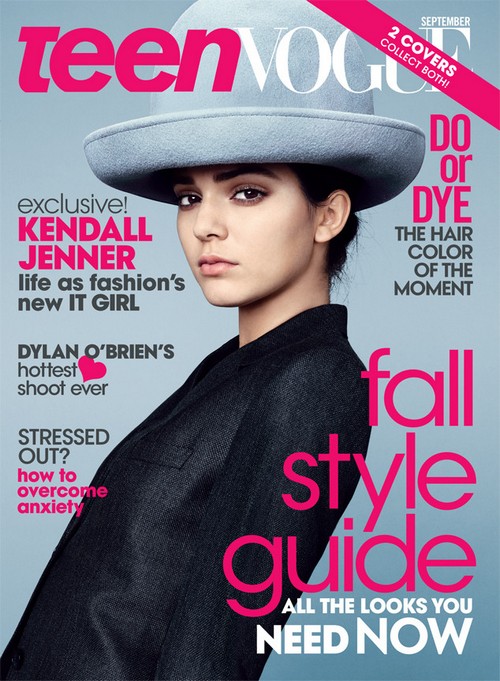 OF COURSE Kendall Jenner always wanted to be a model. She was raised to believe that looks was more important than anything else, including completing her education or actually living her life outside of the fame-obsessed sphere of Hollywood. As such, her focus would obviously be bent towards modeling, getting photographed, getting papped, and generally climbing the stepping ladder of fame. Look at her role models: Kris Jenner, the mother who uses all her children to build her business empire, and Kim Kardashian, the sister who used a sex tape to get famous.Kendall covers the latest issue of Teen Vogue magazine, and she opens up about how she’s always wanted to be a supermodel. Well, she doesn’t say those words exactly, but she does say, “As a kid, I always looked up to supermodels, thinking about how amazing they are. I always wanted to be in photos.”

She also claims that her Kardashian connections hindered rather than helped her modeling career, adding, “People didn’t want to take a chance on me, I think because I was sort of known. They were a little bit on the fence about it… I had to work even harder.”

Look at that: a Kardashian complaining about her fame, yet simultaneously using it for her own benefit. These people are so hypocritical, it’s unbelievable. It’s also hilarious how Kendall tries to claim that her fame didn’t help her career, when it so obviously did. Kendall’s connections were one of the few reasons that she was even able to launch a modeling career, let alone sustain it for all these years. If she thinks any differently, she’s just deluding herself.