LeAnn Rimes To Start Designing Her Own Bikini Line 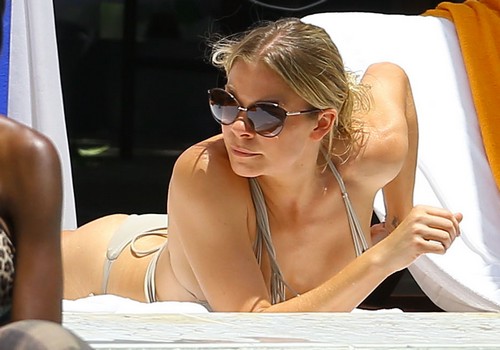 LeAnn Rimes just refuses to quit, doesn’t she? On the one hand, I admire her determination in pursuing her goals, i.e. in this case, the goal of increased fame and money. On the other hand, I really, really don’t want to watch her reality show. Nor do I want to keep hearing about LeAnn, who has proliferated quite alarmingly into the mainstream media thanks to her VH1 reality show, LeAnn and Eddie.

Somewhat tellingly, Eddie Cibrian himself isn’t a major part of the promotional whirlwind, although he’s also making all the obligated stops and interviews with LeAnn. However, he doesn’t draw nearly as much attention as her, largely thanks to her many foot-in-the-mouth moments and ridiculous statements.

For example, LeAnn is apparently building her own bikini line now. How are we supposed to take her seriously when she comes up with business ideas like that at the drop of a hat?

In an interview with Fox411, she explains, “I’ve been researching that [the bikini line] a little bit more as we speak. I mean, I’ve worn so many bikinis that I know what works and what doesn’t. I know what I like and I know what’s missing in the marketplace. We shall see! I hope that it comes to fruition.”

She’s already figuring out the products and everything, as she adds, “I’m an earthly girl. I love very natural colors– nudes and golds. Beautiful, feminine and classy.”

Great. Coming to an outlet store near you in 2015, LeAnn Rimes’ bikini line – following her failed reality show. Who does LeAnn think she’s kidding? This is all just a desperate attempt to save her sinking ship, but the tanking reality show proves that the audience just doesn’t care about LeAnn or her husband, Eddie – or LeAnn’s bikini line, for that matter.