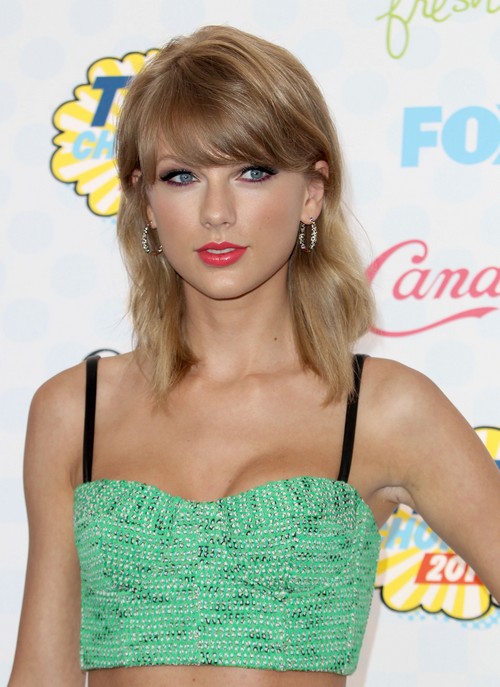 We all know that Taylor Swift hated Justin Bieber, and by extension, was supremely disappointed in Selena Gomez for dating him. In fact, their friendship suffered a lot while Selena was dating Justin, and several sources confirmed that the two former BFFs had stopped talking to each other while Selena and Justin had their fling.

But of course, we also know that Selena and Justin broke up for the billionth time a few weeks ago. There’s a high possibility that they’ll get back together in the future, but for all intents and purposes, they’re broken up right now – and that’s enough for Taylor. Several reports have confirmed that Taylor and Selena have reignited their friendship at the Teen Choice Awards last night, and that Taylor is ‘proud’ of Selena for dumping Justin.

Except, you know, it didn’t quite happen like that. We know that Justin was the one who called off the relationship this time, and that it’s led to Selena acting like a trainwreck in the aftermath. Hopefully, Selena’s reunion with Taylor will help her get back on track in regards to her health and stability, because partying with Cara Delevingne in Ibiza may not be the best way to do it.

In the end, Selena and Taylor will have more fights and more reunion, as is the way with many best friends. But as long as Selena is associated with Justin, Taylor has made it very clear that they will not be talking. Selena just has to figure out what’s more important to her in the long run – a good friendship with Taylor, or an on-again/off-again mess of a relationship with Justin.