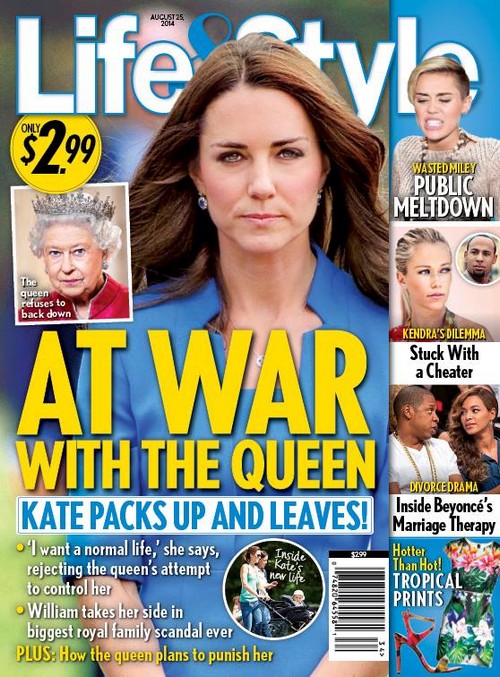 Kate Middleton has proven to be quite the force to reckon with when angry and after a year of having her buttons pushed by the royal family as a whole, she has made some shocking decisions regarding her family. Originally Kate and Prince William had decided to move to Kensington Palace last fall so that they could raise Prince George closer to the royal family Instead of that proving to be a good idea it has been a disaster, resulting in feuds with everyone up to and including Queen Elizabeth.

According to the Aug. 25th print edition of Life & Style magazine the queen has made tons of progress when it comes to taking steps towards modernizing the monarchy her views on parenting an heir are straight out of the dark ages. Meanwhile Kate and William want their children to have as normal as an upbringing as possible and they finally realized that it’ll never happen as long as they are based in Kensington Palace. Kate pushed to move the family to their country home in Anmer Hall, full time and William agreed to the move. The queen has apparently fought hard to convince the couple to stay put but there is no way that Kate is going to do that at this point. She simply wants peace- something that is impossible at the palace.We have been hearing for awhile now that Beyonce and Jay-Z have been going through some serious marriage counseling and apparently Life & Style has the inside track to how things are actually going for these two. Do you think that the rumors of an impending split are true or will they reach some sort of agreement to keep their marriage together?

Speaking of messy marriages, last weekend Kendra Wilkinson and Hank Baskett hosted a bar b q at their home together. A few days prior to that we had heard of Kendra meeting with attorney’s and preparing to file for divorce! Life & Style has the latest on the struggling couple- do you think they are actually back together? Tell us your thoughts in the comments below!