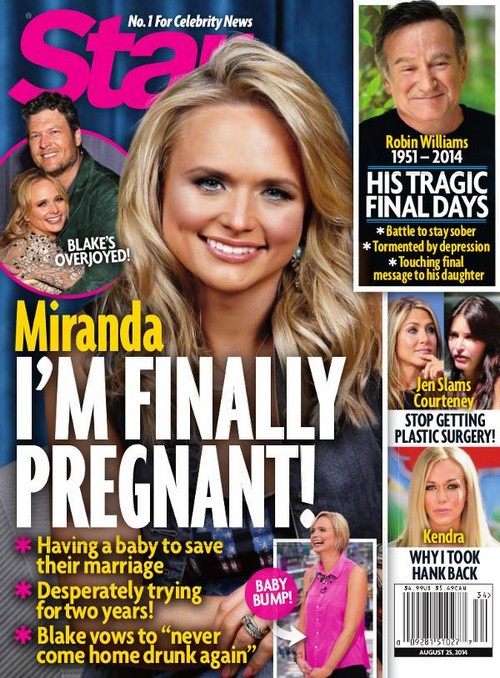 Is it finally time for Miranda Lambert and Blake Shelton to start a family? It might just be. The country couple was at the center of rumors for months on end thanks to Blake’s heavy duty partying and rumored roving eye and it left us thinking that they were on shaky ground. However in the last few months it seems like the divorce rumors have settled down as Miranda and Blake took some time out of their busy work schedules to focus on each other.According to the Aug. 25th print edition of Star Magazine Miranda finally agreed to have a baby in spite of Blake’s missteps. Unfortunately it sounds like girlfriend has fallen prey to the notion that a baby will somehow patch up their often shaky marriage Perhaps she should have talked to countless other celebs that also thought that a band aid baby might be the key to keeping things together. It rarely ever works Blake has supposedly vowed never to come home drunk again which is probably a promise that he is incapable of keeping. If he is an alcoholic as has been reported, and refuses to get help then staying sober, while not impossible, will be very difficult.

The unexpected suicide of Robin Williams has been the main topic for conversation this week and Star takes an in-depth look into his final days alive. Another shocking thing is the news that Kendra Wilkinson may have decided to take back her husband, Hank Baskett. In case you somehow missed the story he was caught cheating with a transsexual model while Kendra was pregnant with their daughter last spring. It seemed like the kind of betrayal that Kendra couldn’t come back from but Star Magazine has all of the details on how the divorce may actually be off.

Do you think that Miranda is making a huge mistake by starting a family with Blake? Will a baby whip him into shape like she is so desperately hoping? Tell us your thoughts in the comments below!

Blake Shelton Divorce: Will Wife Miranda Lambert Quit Singing To Save Marriage And…