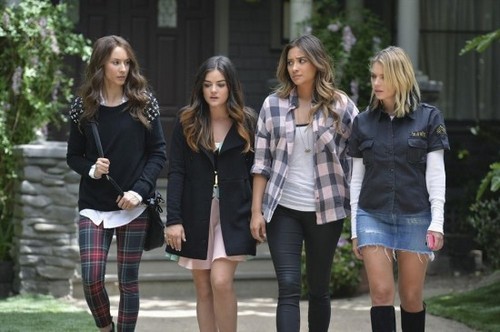 “A Dark Ali,” was another great episode of PRETTY LITTLE LIARS. We have our weekly review for you below:

Cyrus is being interrogated by Tanner. Cyrus knows all the important details to Alison’s fakenapping. Tanner even admits to Ali’s dad dudes story matches perfectly with his daughters.

Team liar is arguing with Ali over this Cyrus guy. They all know he is in ice t Spencer even makes the remark that she really doesn’t have to point to Ali she was in fact never kidnapped. Ali seems to think that her plan A will well draw out A because she reasons that A clearly must be behind all this. All of the girls leave except Emily who was voted as the make sure Ali doesn’t do anything stupid winner of the day. Aria gives hannha a ride while Spencer decides to hide their new found evidence they stole from Noel khan in her house.

Ella is on the phone canceling all of the wedding stuff. The banquet hall is clearly not pleased and she has a bit of a disagreement with them. Aria tries to explain to her mom that there is no rush in these things. Ella ties to take the blame for Zack being a scumbag and Aria won’t have it. Aria tells her mom she can make the rest of the phone calls for her.

Hannah is telling Caleb all about Cyrus and his impossible confession. While Caleb ponders the infinite possibilities this story has Hannah is roaming around around with a garbage can throwing away this and that. Hannah announces she is going to try out for the the school chorus.

Spencer is going to her little hiding spot (it’s in the red couch we saw somebody get into a few weeks back). Spencer is on the home with Emily and straight up has a mini freak out when she realizes somebody took what she was hiding out of there. Spencer explains it to Emily then tells her to hold in. Spencer hangs up the phone and starts searching her room. Melissa comes in and starts talking to Spencer. Spencer’s phone rings and she fakes like its Alison, it’s really the recording of Ali’s bs recording that was stolen from Spencer’s hiding spot playing. Spencer maintains her cool and hangs up. When Melissa walks out Spencer gets a text “Check Mate-A.”

Hannah and Caleb are running down the street. Caleb ask Hannah if she is doing ok. Hannah is doing just fine thank you very much. Spencer comes riding up in her car and tells Hannah her mom told her she was running but she didn’t believe it. Spencer wants to talk to Hannah alone but Hannah tells her no. Spencer looks slightly taken aback but still tries to explain what’s been going on including the fact she has been watching the video from her backyard and man is what she saw good. Hannah doesn’t care and takes off running. Spencer gets a little aggravated and Caleb tells her to drop it, he is doing what she asked, he is helping Hannah.
So since Spencer couldn’t get Hannah to play Nancy Drew with her she enlist Aria and she shows her the video and it is rather interesting. It’s of Melissa talking to some guy in the backyard she hands him something. Spencer zooms in and you can see Melissa tell him to just do it and to trust her. Spencer makes a leap and says it’s Cyrus. I on the other hand think that is to dumbed down for this show so it must be someone else. Spencer wants them to cut Ali loose and just tell Tanner everything including the fact Ali’s story is a big fat lie. Aria of course has reservations but Spencer thinks that a self defense plea will cover Aria.

Hannah walks into her audition only to hear MonA warming up for it as well. Hannah isn’t to pleased but she still takes a seat.

Aria tells EzrA about Cyrus’s confession. EzrA thinks he needs to talk to Alison. Aria tells him it’s just not going to happen, he just got his stitches out and the all clear from his doctor. Aria makes him promise not to say anything to Ali. No more crazy train for him. EzrA promises.

Meanwhile Emily is trying to talk some freaking sense into Ali. Emily keeps telling her she can’t send a complete stranger to jail. Ali tells her Cyrus isn’t a stranger and she shows Emily the infamous cut on her leg. Ali then spins a tale about how Cyrus cut her one night and took off with all her stuff while she was on the run. Is it true? I’m going with no only because the doctor had said awhile back that the cut was suspect when he gave her a physical. Emily tells her she still can’t send him to jail for kidnapping. Ali seems to know that.

Back over at Hannah’s land of misery MonA just keeps singing louder and louder. Hannah gets pissed and finally yells at her that they get it she can freaking sing. The teacher comes out and calls them all in to audition. Mona hits the floor and Hannah runs to her.

Spencer is sitting in Emily’s floor going through Noel’s evidence. She offers Emily a carrot stick when Emily walks in. Emily grabs the stuff and tells Spencer they need to get rid of it. Emily is not down with the whole turn on Ali plan. Spencer wants to know what Ali told Emily but Emily tells her Ali made her promise not to tell them. Yeah because it’s a damn lie and she knows Hannah can verify it.

Mona comes to and ask what happened. Hannah tells her she fainted and then she tells Hannah to get her bag for her. Hannah takes a peek inside and sees Cyrus’s mug shot in it.

EzrA sees Ali in the brew and can’t resist walking over to her and having a little chat with her. When her dad walks in he is not happy to see EzrA talking to his daughter and tells EzrA to shove off. Aria saw the whole thing.

Alison’s dad reminds her if she hasn’t ID’D him before the 48 hours are up Cyrus is a free man.
Hannah followed MonA to her rental car and hops in. Hannah explains she doe st trust MonA because they all know Ali brings out the A in her. Hannah suggest that Mona is behind the whole Cyrus confession. Mona tells her she did no such thing but is trying to figure out who did. They see Tanner get in her car with Ali and her dad. Mona hacks into her blue tooth from her lap top. Hannah tells her to follow them. Mona tells her they are there to see A.

Aria is chewing EzrA for doing the exact opposite of what she asked. Aria drops some stuff and he tries to help. Aria snatches it up, slams the back end and takes off. Poor EzrA is just left standing there feeling like poo.

Spencer finds Melissa waiting for her when she sneaks back in from the barn. Melissa decides maybe instead of sneaking through each other’s rooms they should trying being honest. Spencer is down with that. However the only thing Melissa is willing to admit is she helped MonA in hopes of showing Spencer she can’t trust Ali. Although she does rather cryptically tell Spencer Rosewood isn’t safe for either of them and perhaps Spencer should come with her before she heads out.

Tanner has Ali taking a trip down memory lane by way of the basement. Ali has a bunch of flashbacks to her time down there and when Tanner ask her if it looks familiar Ali tells her she will never be able to forget it. That’s all Tanner needs and she makes the call.

Mona and Hannah here the call when it comes in and they both look at each other in shock. Hannah can’t believe Ali did what they all told her not to do.

Aria is on the phone with Emily chit chatting about how she can’t trust EzrA as far as she can throw him. Project much Aria. EzrA isn’t Zack. Ella walks in and tries to make that exact point she also tells Aria that people can in fact change. Aria would be wise to listen to momma Montgomery. Hannah text her and it’s of course a S.O.S. Hannah lets her know they need to meet because Ali did the stupid thing and now Cyrus is going to jail.

Emily is waiting for Ali when she gets home. Emily lets Ali have it. Emily tells her she is tires of all the lies and Ali throwing them under the bus to save herself. Emily tells her she has had it and she is done with her. Emily drives off while Alison just stands there stunned.

Caleb is at Hannah’s with the other girls…minus Emily who is no doubt on her way. Hannah tells Caleb all about Cyrus including the fact he somehow managed to escape police custody in the nick of time. Then again this is Rosewood PD. Hannah tells him Spencer has a plan and a horrible one at that. She apologizes for lying to him earlier and then kisses him goodbye. Hannah heads into the kitchen where they discuss going to the police. Emily walks in and hands over the goods they got from Noel Kahn. Emily tells Aria she hopes she will get on board because they need to do this tonight.

This is where the show gets crazy. Cyrus is standing in the woods waiting for someone. That someone turns out to be Ali in a black wig. Cyrus threatens to tell the cops about all the fun they had. Hmmmmmmm…….She hands him a airplane ticket and a passport and tells him this is his one chance to start over. Cyrus leaves.

Melissa is siting in the Hastings kitchen making a video for Spencer. Presumably in which she is going to tell her the truth. Melissa’s chances of dying in the finale just increased dramatically.

A Tag- A is watching the tv and folding black hoodies. Then much to my delight and confusion A whips out a candy striper outfit. Just like Ali’s. Just saying…….

If you are like me and you are anxiously awaiting each episode, we have managed to get our hands on a sneak peek video and some spoilers to whet your appetite for next week’s episode 11 called “No One Here Can Love or Understand Me.”  RIGHT HERE!