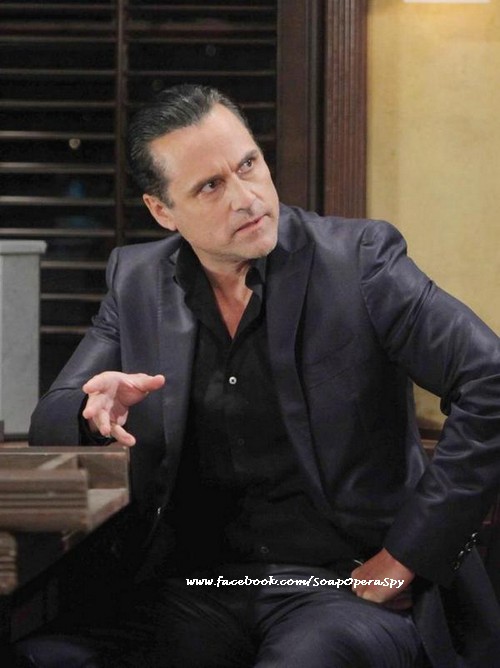 General Hospital Recap and Weekly Review August 11th – August 15th, 2014 is below for your enjoyment!

Monday- Emma is on Skype with Robin. She tells her she doesn’t want to say goodbye. Patrick manages to get a call from Sam which means he won’t have to talk to Robin. Sam tells him she is determined to take Nina down. Robin confirms to Emma that her and her daddy are getting a divorce. Robin promises Emma that no matter what they will always be a family. After the she gets off with Robin Emma ask Patrick questions about the divorce. Alone tells Emma is it wasn’t her fault.

Robin meanwhile is blaming Victor Cassadine for the end of her marriage. Victor points out that Robin did exactly what Robin wanted to do and that no arm twisting was involved on his part. Well played Victor. Victor tells,her to,get back to work or he will harm Patrick. Robin tells him she believes she has made a breakthrough. Victor orders her to use it on Jason first. Robin prefers to stick Helena or Stavros first. Victor isn’t having it and has his guards hold her while he shoots up Jason.

Silas pays a visit to Sam to update her on Molly’s recollection of Rafe’s final moments and words. Even though dam is extremely uncomfortable around him she tells him she isn’t sure what to think and then accidentally lets it be known she has been spending a awful lot of time with Drake Jr. Speak of the devil Patrick shoes up and Sam tells him what Silas told her Molly has to say. Silas now the uncomfortable one sadly leaves. Sam gives patrick a hug and tells him it will be ok. Patrick wants Sam to find who is to blame for all this.

Nathan is told by a photographer that someone stole the necklace. Nathan thinks it’s Felicia but he photographer doesn’t. Nathan shows him a pick of Levi but the guy can’t say if it was him or not.

Meanwhile everyone is getting ready for Maxie and Levi’s wedding. Mac tries his best to get Maxie to admit she has feelings for Nathan but she won’t. Levi is in his room with a gun.

Tuesday- Maxie tells Lulu all about her talk with Mac while she gets ready. She tells Lulu she doesn’t have feelings for Nathan but Lulu doesn’t believe her. Maxie brings up how Levi saved her from being selfish. Lulu points out that love and gratitude are two different things. Maxie gets upset and tells Lulu if she doesn’t zip,it she can’t be her Maid of a honor. Lulu zips it.

In the ballroom Felicia tells Dante and Mac Nathan showed up to ask questions about her Aztec necklace, he is with Levi in fact. Lucy comes flying in to handle the marrying of the two. The immigration official shows up shortly after.

Levi pulls a gun in Nathan and tells him to give him the necklace. Levi’s accent is gone and he finally admits it’s not Maxie he wants but rather the heirlooms. Nathan punches the jerk and they start fighting. A while later Levi joins Dante. When Dante questions him about Nathan he tells him he asked him some questions and then left. Dante notices blood on Levi’s collar.

Maxie goes looking for Levi, she misses seeing a unconscious bound and bloody Nathan all together. Just as she leaves Nathan wakes up.

The wedding starts. Dante takes off and finds Nathan. Lucy is at the are there any objections part of the ceremony.

Sam is a amazed that Patrick would ever think she wouldn’t help him. Sam tells Patrick he is important to her and has been since Danny got sick. She even gives him props for helping her get over Jason and move on. Patrick ask her if she ever thinks Jason will come back. Sam tells,him not anymore and she can’t keep living in limbo. Patrick comforts her. Patrick then tells her that he and Robin are over and that he is okay with it. Patrick decides to leave before anything can happen between them.

Jason vital signs rise and then alarms go off. Victor turns and tells she has failed and now Jason is dead. Robin wants a chance to save him and uses the paddles. Victor has his guards pull her off. Before he close the lid Jason’s hand pops up. Robin is ecstatic. Robin tells Victor she and Jason will leave together. Victor has other plans for Jason and reminds Robin she should never trust a Cassidine. The guards carry her out. Victor tells Jason he has plans for him. Jason begins to rise out of the chamber.

Wednesday– Franco is taking a shower after getting covered in paint by a patient. Franco and Felix joke back and forth a bit. Brad comes in acts way to awkward for anyone’s liking and the takes off. Felix explains all to Franco. Franco offers a high five in honor of his three way. But Felix is old fashioned and isn’t really that thrilled about it.

Britt wants Nikolas to have lunch with her but he has plans with Liz. Nikolas tells Britt she can come along but she declines. Britt runs to Brad and bitches about it. Brad explains about his three way and thinks it’s his way to get Lucas. Britt agrees and tells him to go for it. Brad tells her to go after Nikolas.

Sonny runs into Olivia outside of Kelly’s and tells her he is happy former and that Ned is a good enough guy. Olivia tells him she still cares for him but it’s time her and Sonny move on. She wants them to be friends one day.

Carly is asleep and she remembers Sonny’s kiss. Luca pops in and wakes her up and accuses her of having a naughty dream. Carly changes the subject by bringing up Brad and Felix and tells Lucas that he can’t have them both. Lucas tells her he is planning a three way with them. Carly thinks it’s a great idea but tells Lucas he can’t do it at her house.

Lucas goes to the hospital and tells Brad and Felix he wants a date with both of them.

Dante unites Nathan and hands him his gun. They make their way back to the ballroom. Maxie tries to back out but Levi guilts her into going through with it. Before they can be pronounced as husband and wife Nathan bust in and arrest Levi. Levi pulls out his gun and grabs Maxie. They begin bickering. Dante tries to sneak around a corner, Levi threatens to kill Maxie if he isn’t given the earrings. Dante comes running in. The immigration guy grans Lulu and threatens to shoot her. He is on the scam with Levi.

Thursday– Obrecht stops Nina to chat about Madeline. Nina knows all about Obrecht. She scolds Nina for not keeping up with PT schedule. Franco rushes up gives Obrecht a kiss and tell her it’s his fault that Nina is one of his best patients. Obrecht is happy about it and offers to take Nina to a session. Franco insist on doing it . Nina thanks him and as luck would have it their elevator gets stuck.

Lucas Felix and Brad make plans to get together. Carly won’t let them do it at her place, Felix can’t host because Sabrina will be back the next day so Brads place it is. He tells them to be at his place in 30 he will take care of Britt.

Sonny is thinking about Carly when he runs into milo. Milo tells him work hasn’t been that great. Sonny offers him his old jib but milo declines. Milo tells Sonny he has net someone but his father won’t approve of her. Sonny tells Milo to never let anything come between his happiness.
Milo,gets a,call to bring a pizza to Carly’s. Sonny gets a idea.

After Britt crashes Nikolas and Liz’s date Liz knocks her milkshake all over Britt. When Britt leaves to clean up Nikolas calls her out for doing it. Before Liz can tell Nikolas what she needs to Obrecht calls her into work. At the same time Brad calls Britt and tells her to find somewhere else to stay for the night. Britt tells Nikolas she needs a place to stay and he offers her a place at his house.

Olivia shows up and apologizes but it soon turns to bickering over Sonny. Carly calls Franco and tells him she ordered them a pizza. Franco tells her she is stuck in a elevator. Carly is upset. Carly later opens her door to Sonny who has her pizza.

Nathan and Dante back off so nothing happens to Maxie and Lulu. Left gets the Aztec ring from Maxie. Levi says they have a boat to take them out of town with Maxie and Lulu. Mac yells at Levi to leave the girls and is then shot. Max falls and everyone rushes to help him while Levi and his accomplice drag the girls off.

Lucas is the first to show up at Brads.

Friday– Carly ask sonny what he is doing at her house. It starts to storm and she tries to shoo him away, Sonny insist he just wants to keep,her company so Carly gives In and they share the pizza. Sonny tells Carly he wants to save her from herself.

Milo needs to talk to Felix and he wants it to be somewhere private. Felix takes him to a exam room and explains that he is really hung up on someone. Felix starts to get the wrong idea. Milo finally admits it’s Epiphany he is interested in. Felix seems bummed. Milo assures him any guy would be lucky to have him.

Nina and Franco are still in the elevator. Nina tells,him she was supposed to get pregnant tonight. Franco brings up Ava and Kiki. Nina already knows all about Ava. Franco brings up the fact she is pregnant with Sonny’s baby. Nina then tells Franco she Sonny kissing Carly.

Lucas and Brad are waiting for Felix. Brad accuses Lucas of just using him in order to gain access to Felix. Lucas tells him that isn’t true that he chose Brad over Felix. Felix calls Brad to tell,him he isn’t coming after all and that they should go ahead without him. That’s all the push they need and they jump in bed together.

Britt is with Nikolas joking about his family. Spencer sees her and runs over and hugs her. Spencer assumes this means they are back together. Britt explains to Spencer she only there for one night. Nikolas goes to fix her a room and when he returns Spencer has made s’mores. After some fun Spencer knocks out. While Britt is helping Nikolas get the marshmallow out of his beard she kisses him.