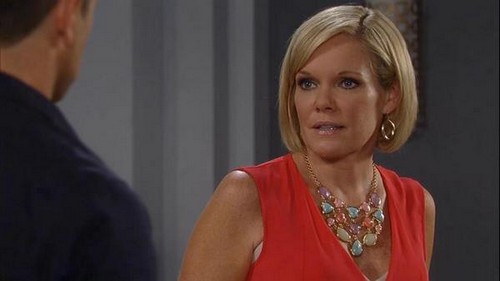 General Hospital Recap and Weekly Review August 18th – August 22nd, 2014 is below for your enjoyment!

Monday– Anna is barking orders at the pier. Then tells the coast guard what’s going in with the hostages. Dante and Nathan manage to find a ship captain and it’s just not any ship captain it’s the one Levi and his partner took so they could escape with Maxie and Lulu. The captain tells them they are heading to Canada. When the coast guard comes back later they tell Anna they found the boat under the water. Nathan starts get angry with himself because that’s going to be a big help. Next the coast guard informs them they found Maxie’s veil in the water as well.

Nikolas pulls away from Britt. Nikolas tells her he has feelings for both her and Liz and doesn’t want to hurt her. Britt still wants a sex romp even if it is for one night only. Liz calls him not once but twice. When Nikolas answers she tells him his sister Lulu has been taken as a hostage.

Nina is getting Franco all pissed off with details of Sonny and Carly’s kiss. In fact Franco gets so angry he starts punching the elevator door. Nina stands up and Franco realizes she has been scamming everyone. Nina tells him to keep his yap shut.

Mac who even while shot is still quite the power house explains to Liz all about what happened at the wedding.

Sonny is telling Carly they he would like for then to get together again. Because hey what could possibly happen that hasn’t already happened before. Sonny kisses her. Carly to her credit tries to resist him for who know the usual five seconds. She even attempts to throw him out. But ends up grabbing him and kissing him instead.

Maxie and Lulu are taken to cabin by Levi where he tells them they are going to be together for awhile.

Tuesday– Alice wakes up after her transplant. Tracy reminds her to keep her mouth shut when everyone is out of earshot. Michael hears the part where Alice blurts out what Tracy and “Luke” are up to and he fires Tracy right then and there. Tracy threatens to sue him. Michael welcomes it.

Olivia runs into Ned in the hall. Ned still wants to see Olivia he enjoys spending time with her and ask her to a movie. Olivia says yes.

Rosalie is creaking out because she can’t find Nina. Silas tells her to chill the f out Nina is stuck in the elevator. Rosalie gets smart and Silas reminds her he pays for her services not her attitude. She runs into Morgan and they chit chat for a minute, Rosalie ask him out for a drink
. Morgan takes a rain check.

Franco decides to call Carly the second he is out of the elevator. Nina stops him long enough to make sure she will keep her secret. Franco says he will. Silas overhears. But they cover nicely.

Nina tells Rosalie that that bitch Ava is pregnant….again.

Kiki visits Ava for her birthday.

Carly and Sonny are having sex and end up knocking a picture of her and Franco off her dresser. Later she finds the picture and gets upset. Franco comes home early and prevents round two. Sonny gets to hear Franco question Carly about their kiss. Carly promises it won’t happen again. Franco ask about the wine glass on the table.

Wednesday– Shawn and Jordan decide after basking in the afterglow of another hook up to add to the numerous others they have been having that TJ not know about it. Jordan subtly hints that she doesn’t work for the Jerome’s. Shawn gets curious so she changes the subject to Sonny. Shawn warns her about selling drugs to kids. Jordan tells him she will be free of her bosses soon.

Kiki has Ava blow out a ding dong for her birthday. The baby starts kicking and Kiki reaches out to touch it, they hug each other and then Ava sends Kiki home.

Ned and Michael are talking about Tracy and her las test scheme. They try to come up with a plan.

Tracy is telling “Luke” all about what happened. Ned rushes in and slams the laptop down. Tracy gets angry when Ned suggest that “Luke” is just using her and slaps him. Ned kicks her out of the house.

Ava chats up “Luke” next. He wants her to kill Michael. Ava can’t believe her ears.

Bobbie shows up at Carly’s so she tells Franco it was her wine glass. Franco heads upstairs and Sonny calls and tells her he went out the window. Sonny went out a window? Carly meets him outside. Sonny tells her he would like to jump her bones every night. They kiss some more. Carly tells him to go and slams the door on him. Bobbie gets Franco to calm down and she watches as he and Carly hug all the while Bobbie is shaking her head.

Thursday– After another day of sex, sex, sex, and more sex Jordan and Shawn get up and get dressed to go to work.

Julian is skyping with “Luke” when Jordan walks in and surprises him. Jordan ask if he was talking to Luke Spencer. Julian laughs and swears on the life’s of everyone he knows that it wasn’t. Jordan ask who their boss is. Julian warns her against finding out.

Carly text Sonny and tells him to leave her the hell alone. Franco leaves for work. Bobbie pounces and ask Carly just what in the hell is going on. Carly tells Bobbie she partook in a little hanky panky with Sonny. Bobbie tells Carly not to trade one mistake for another if one of them has dimples. Bobbie thinks she is playing with fire.

Shawn tells Sonny he has been hopping in the sac with Jordan the last few weeks. Sonny says that’s cool and by the way I totally banged Carly. Shawn thinks now is a good time to take Franco out. Before they can discuss that further Carly shows up.

Sam shows up at Silas’s to discuss Rafe. Nina objects but Silas tells her to scoot. Sam wants Rafe’s phone. Silas gets a box with his things in it. Besides the phone they also find 500 in his wallet. Neither knows where he got it from. Sam suggest Nina gave it to him. Silas gets upset and tells Sam Nina is the cause of every problem in town.

Sabrina shows up at Patricks and tells him she is ready to get back to work. Patrick tells he was fired and then tells her why. Patrick tells Sabrina Sam is trying to find out who put Rafe up to it.

Ned runs into Alexis and lets her in in the latest dysfunction in Quartermaine land. Alexis tells him she broke up with Julian.

Franco talks to Nina and realizes she wants to do to him what he did to her.

Friday– Sam tells Silas she is trying to help Patrick. Silas comments on how they are spending a lot of time together. Sam points he has been doing the same with Nina. Sam ask for Rafe’s phone. After Sam leaves Silas finds a card for a Crichton-‘Clark coma clinic in Rafe’s stuff.

Ava tells Julian that “Luke” wants her to kill Michael. Come to find out Julian has known the whole time dude wasn’t really “Luke” but he also doesn’t know his real identity.

Nina and Rosalie talk about her becoming pregnant. Nina reminds her there are other ways for who to get pregnant that don’t include cheating.

Franco wants some of Alice’s flowers to give to Carly. When Michael ask why he explains the situation. Michael and Morgan then tell Franco about thousands of times Sonny and Carly have been together.

Ava sends Kiki a dinner invite for her and Michael.

Sonny grabs Carly and kisses her. Carly manages to,escape but not before Sonny tells her he will see her next time.