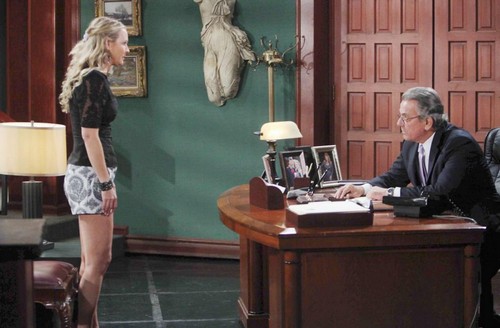 Monday– Abby is discussing birth options with Victoria. Abby is apparently going to be her birth coach. You know because Billy or Stitch would be awkward. After Victoria leaves Abby decides to throw more shade Stitch’s way and points out he is a murderer. Stitch tell her it wasn’t premeditated. They bicker and Abby finally delivers the punch by telling him her mother doesn’t want him to raise a baby anymore than Jenna did.

Nick is distracted by listening to a tape of Helen and Ian and flashbacks of Cassie when she was a little girl. Nick calls someone and tells them he needs their help. He will send the Newman jet. Sharon walks in and tells Nick that Mariah is filling the casket sized void in his heart and this seems to shake him up just a bit. Nick leaves. Mariah thinking Sharon is Nick comes prancing into the kitchen in lingerie.

Hilary tells Devon that Neil is going home from the hospital. Devon tells her Cane and Lily are making the house easier for him to use. Hilary is still blaming herself. Devon tells her when Neil can see they will come clean. I wonder if maybe he is faking it just to see if something is going on between Devon and Hilary. A nurse mistakes Devon has Hilary’s husband and she has a epic freak out. Devon tells her to relax.

Chelsea and Billy are talking which turns to flirting which almost leads to a kiss but Victoria puts the brakes on that. Billy jumps up to and tells Victoria she didn’t interrupt anything important. Chelsea understandably feels like shit. He keeps making a big deal over Victoria which inky serves to make Chelsea feel worse.

Nick opens a door of a suite and says thank God you’re here.

Tuesday– Its Grace In lingerie. Way to go Nick two for two. Grace grabs him and starts running her hands all over him. Nick rains on her parade when he tells her it’s strictly a business. Nick brings up Sharon and Cassie. Upon seeing a picture of Mariah Grace gets the wiggins. Grace tells Nick the day Cassie was born she and Doris were throw. Out of the room by a new nurse called Helen. She also mentions that Helen wouldn’t allow them to see the baby. Nick thanks Grace. Nick lets Sharon know he is going out of town. I totally know where this is going the only
place it possibly can Mariah is Cassie’s twin sister.

Michael and Lauren get together for a little afternoon delight. Unfortunately Michael can’t get it up. Lauren tells him it’s not a problem but her face betrays her when she is putting her clothes on to go back to work.

Meanwhile Mariah half naked is trying to fumble out a excuse to Sharon. Sharon is having nine of that she has Mariah’s number. Mariah finally admits it and then informs Sharon she is a selfish bitch. Sharon kicks her to the curb.

Victoria runs into Stitch at the hospital. She is having abdominal pains. Abby shows up and they wheel her in. They hook her up to some monitors. The baby is fine.

Billy and Chelsea are getting their flirt on again when Stitch calls and tells him about Victoria being admitted to the hospital. Billy thanks him much to my surprise.

Wednesday– Nikki arrives to support Paul. Before her and Christine can get into it again for what has to be the millionth time in the past month Nikki gets a call about Victoria and leaves.

Dylan and Avery are having it out about Austin and the fact she is helping him. Dylan wants Austin to pay for what he did.

Summer and Austin are getting ready for his trial. Jack runs into Victor outside the door and they get into it. After seeing Austin Victor leaves. Jack gifts Summer with a good luck charm her mother got in Istanbul.

Lilly is complaining that Neil’s apartment is a death trap and it’s all Hilary’s fault. Neil is not happy with the changes that have been made and he screams at everyone for treating him like a child. After Hilary tells Devon she has to be there for Neil Devon leaves.

Billy arrives to see Victoria and he gets all of ten seconds before Nikki and Victor show up to fawn over her.

Stitch and Kelly are chit chatting. Kelly tells him to fight for Victoria.

Everybody arrives at the courthouse for Austin’s trial. Austin apologizes to Paul. Paul tells Austin that he has agreed to a deal that will keep him out of prison.

Dylan is pissed about Austin’s lucky deal. Avery meanwhile gets a call about Phyllis.

Jack tells Kelly a deal was made for Austin.

Thursday– noah finds Sharon taking out the trash p. No I don’t mean Mariah. Sharon tells noah that Mariah was going to seduce Nick. Sharon takes some of the blame. Faith over hears and Sharon explains that it’s what best for everyone involved. Sharon admits she gave Mariah a chance because she looked so much like Cassie. Sharon heads to Victor to chew him. Noah leaves Nick a message.

Mariah calls Ian and tells him it’s all falling apart. Mariah runs into Kevin and tells,him she is going to leave town. Kevin wants to go and offers her a ride on his Harley.

Jack wants Kelly to move in with him. Kelly chuckles she thought he wanted to marry her. They decide she will move into the Abbot mansion.

Nick is trying to get ahold of some adoption papers by flirting. It works and he finds out who the doctor was the night Sharon had Cassie. The nurse tells him the doctor now teaches at Madison University. Nick calls victors private investigator.

Austin’s concerned about paying his fine. Victor shows up and tells Summer he will grant her limited access to her trust find so that it can get paid. Avery shows up to have Summer sign papers that will giver her power of attorney over Phyllis.

Victor meanwhile is back at his office looking at the papers the summer would need to sign to get Phyllis the experimental treatment.

Nick shows up at the doctors office and ask him about Helen. The doctor refuses to cooperate. Nick tells him he has something on him.

Victor finds Sharon waiting for him.

Friday-Nick threatens to ruin the doctor if he doesn’t start talking. The doctor tells Nick that there were two babies. Duh really. He took one before Sharon saw it. Helen took it and helped him pay off his gambling debts. The doctor tell Nick he saw nothing wrong with it. Nick lets the FBI in to arrest him.

Sharon tells at Victor about Mariah trying to seduce Nick. Sharon accuses him of using Mariah as a way to get to her. Victor is sorry Sharon has been hurt but he has no intentions of stopping until he finds out what her secret is.

Victor later calls to to get Phyllis’s treatment started.

Summer takes Austin with her to visit Phyllis. Austin sits down and talks to Phyllis about how much he loves Summer.

Chelsea tells Billy she is leaving town for awhile. Billy assumes it’s to,get away from him. Chelsea doesn’t deny that but she also says it’s to get away from her memories of Adam. Billy tells Chelsea he will miss her. They kiss each other and they wish each other luck.

Nick comes home and ask Sharon where Mariah is. Sharon tells him she threw her out. Nick is insistent that they find her. Sharon wants to know why.