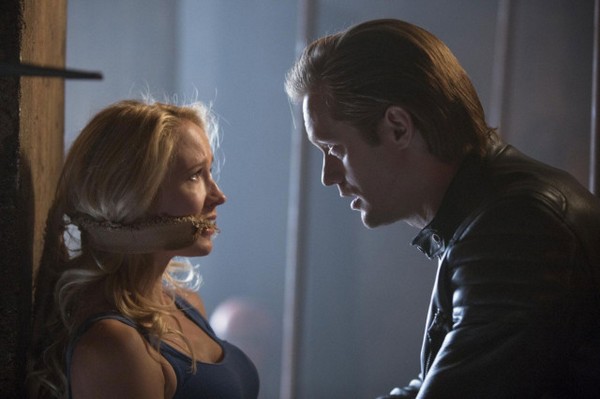 Bill finally goes in to Sookie’s. Bill expresses how he believes Sookie deserves the world instead of a dark future with him. Bill then goes on to state his case by talking about his life as a vampire. How if he were to continue to live and stay with Sookie she wouldn’t be able to have children. Bill gets to the point and ask Sookie to kill him with her pretty little ball of faerie light. Sookie refuses and then throws him out.

Eric is still in the dungeon with Pam. Eric gets a idea. He lets Sarah go. When Mr. Gus comes back he explains she got away through some tunnels. Mr. Gus is not pleased. Eric does away with him in short order and as far as deaths go it’s kinda awesome.

Pam later finds Sarah at a amusement park eating from the trash. Sarah wants to be turned. Pam who we all know relishes others misery denies to give Sarah what she wants.

Jessica goes to see Bill at his mansion. Jessica doesn’t want to die but reassures him that she will be fine. Hoyt happens to be with her. Bill point blank ask Hoyt if he plans on asking Jessica to marry him. Jessica gets a little upset and takes Bill aside and ask what is up with all the personal questions. Bill tells Jessica he hasn’t got much time left and he just wants to know his daughter is going to be happy. Jessica decides that if she and Hoyt get married right away Bill will able to see it.

Sookie is in the kitchen having a flashback of a time with Gran when she and Tara were little girls.

Sookie goes to Jason’s and tells him what Bill asked her to do. Bridgette is still there. Jason as usual is confused. Both Sookie and Jason’s phones ring simultaneously. Hoyt for Jason asking him to be his best man and Jessica for Sookie.

Jessica’s wedding day. Sookie is in pink. Andy shows up to marry them. Bill pulls Andy aside and tells him that since he and Andy are related Andy will be inheriting Bills assets mansion included. Bill wants Andy to rent Jessica the mansion for a dollar a month and if perchance she forgets to pay for whatever reason he wants Andy to look the other way.

Hoyt is having a panic attack of epic proportions. Jason gets him to calm down and tells him to go on and get out there and marry the girl of his dreams. Jason should have punched him.

As Bill is walking Jessica down the aisle his ears begin to bleed. Bill literally is a dead man walking. Bill tells Jessica how beautiful she is and then sits down beside Sookie who for the record can read his mind for the first time. Andy starts the ceremony and soon Jessica and Hoyt are married.

Sookie informs Jason as he is driving her home that she heard Bill’s thoughts which indicates he is becoming human in his dying.

Sookie needing guidance goes to see the preacher. Hope his v trip has wore off. Sookie wants to know if he thinks God made everyone who they are supposed to be or if they are some who are mistakes. The preacher tells her that he thinks God made everyone with a gift and the ability to one day use these gifts to take their fate into their own hands.

Sookie arrives at a decision. Sookie calls Bill and tells him she has changed her mind and in fact will use her little ball of light to kill him and after she plans on giving up her rights as a faerie. Bill doesn’t try to change her mind. Which to a degree pisses me off. I realize he is dying and all but I can’t believe he is so selfish that he would want Sookie to give up what makes her her. Sookie puts on her black dress and shoes, she studies herself in the mirror for several minutes. Finally she walks out the front door and beats Bill to his coffin in the cemetery. Bill shows up. He and Sookie talk about why vampires carry coffins. Sookie finally breaks down and tells Bill she doesn’t want to do it. They hold each other and he gives her one final kiss. Bill says thank you. Bill climbs down and opens his coffin. Inside he finds a picture of him and his daughter. Sookie tells him to climb in before she loses her nerve. Bill gets in and lies down. Sookie gathers her ball of light and watches it as it glows in her hand. Bill calls her name. Sookie tells him she can’t kill him that way because being a faerie is part of her and she won’t give that up. She puts the ball out. Sookie ask Bill if he still wants to die. Bill tells her he does. Sookie looks around and finds a shovel she breaks it and has herself a stake. Sookie climbs down into the grave and puts it to Bills chest. There is a brief second where you think she won’t actually stake him followed by the second in which she does with his help. Sookie puts the lid on his coffin and then sits there and cries covered in Bill’s blood. Sookie climbs out and precedes to cover the coffin with dirt using her hands. When she is done she walks out of the cemetery and heads down the road. So just to recap BILL COMPTON IS DEAD.

One year later we see Eric and Pam doing a info commercial for New Blood the temporary cure for hep-v. They give some bs story about how Pam knew Sarah was the cure and so she went on a hunt for her and sure enough Pam was right. Unfortunately Sarah got away but not before cutting herself on a shard of glass that Eric had his people in Sweden synthesize and make into his new multi million dollar venture New Blood.

Three years later Pam and Eric are ringing the opening bell on Wall Street. They look as happy as happy can be.

Thanksgiving and Sookie is pregnant in the kitchen getting food ready for a feast.

Eric is sitting on his throne in Fangtasia. Pam is down stairs selling a minute of sucking Sarah’s blood for a 100 grand. Pam leaves her chained up and as she cries she sees a figment of her imagination Steve Newlin, who assures her he is never leaving. Steve tells her it’s Thanksgiving and precedes to tell her what he is thankful for, surprisingly Jason is not one of those things. Steve ask Sarah what she is thankful for and she says nothing. Sarah starts crying.

Back at Sookie’s everyone is showing up for Thanksgiving. Jason and Bridgette with their three kids. Sam and Nicole with their two. Hoyt and Jessica. Holly and Andy and their kids. Willa. Arlene and Keith. Pretty much everybody. Last shot is of Sookie hugging the daddy to be of her baby and both of them sitting down to eat.