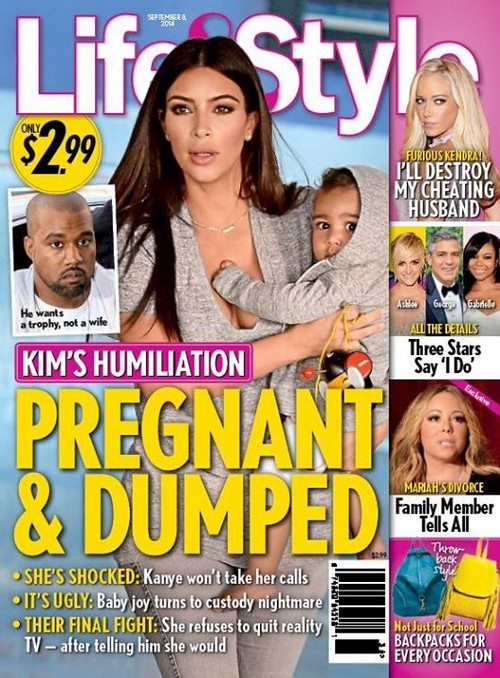 It was going to be a really bumpy road for Kim Kardashian and Kanye West’s relationship after swapping vows back in late May. He considers himself to be up there with the likes of Jesus and Gandhi and Kim just looks good on his arm. She was likely too self absorbed to realize the kind of man that she was marrying and so when you put them together now it’s a real mess. Kim has let it be known that she and Kanye would be trying for a second child immediately after the wedding and according to the Sept. 8th print edition of Life & Style Magazine she is indeed pregnant.

The problem is that this is basically a band aid baby. Kim thought that by getting pregnant Kanye would pay more attention and spend more time with her. She must have forgotten how he spent most of her first pregnancy in France, basically as far from his baby mama as he could get! Anyway, sources now say that these two are so far past the point of fighting that Kanye has actually stopped taking Kim’s calls. Think about that- the hot head actually has run out of things to say!  Now Kim is left wrangling North West and dealing with early pregnancy all on her own.Speaking of messy relationships- why on earth has Kendra Wilkinson taken back her husband Hank Baskett after finding out that he cheated on her with a transsexual?  Sources say part of the reason is because she is still contracted to film her reality show and so since Hank publicly humiliated her, well she is simply returning the favor!

Mariah Carey may have put a bit of a gag on Nick Cannon, preventing him legally from discussing the status of their marriage but that doesn’t mean that the truth isn’t going to come out. Life & Style has found a family member who is more than willing to give up the details on how their marriage actually imploded. Are you curious to learn all the juicy details- tell us your thoughts in the comments below!