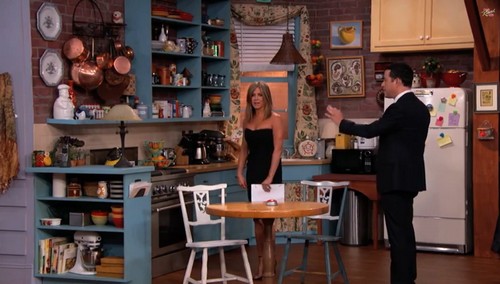 Years of fans begging for a Friends reunion has finally paid off, albeit probably not in the fashion that they hoped. Jimmy Kimmel Live just hosted a fantastic Friends reunion on his show, with Jennifer Aniston, Courteney Cox, and Lisa Kudrow all showing up to film a ‘scene’.

Granted, it was obviously not a true reunion without Matt LeBlanc, David Schwimmer, and Matthew Perry. However, this is probably the best we’re going to get right now, at least until the men want a quick paycheck and agree to a proper reunion.

Jimmy Kimmel recreated the Friends set on his show, and took the role of Ross in a scene that he himself created. Then, he got Jennifer, Lisa, and Courteney to each play their roles in the scene, although Jennifer refused to wear a Rachel wig. Most of the scene comprised of the women discussing ‘Ross’ and his prowess in bed, which was obviously a joke. But it was nice to see a brief reminder of the show, even if it was done all in jest.

This also does show that all three of the women are up for a proper reunion, given the time and effort they would have given in showing up for Jimmy’s show and filming that little segment. However, since David lives in NYC, and Matt and Matthew are both busy with their careers, it’ll still be a long time before we see a proper reunion on TV. Let’s just hope that it happens sooner rather than later.

To check out the video head over here – https://www.youtube.com/watch?v=i4H2JHp5XOQ