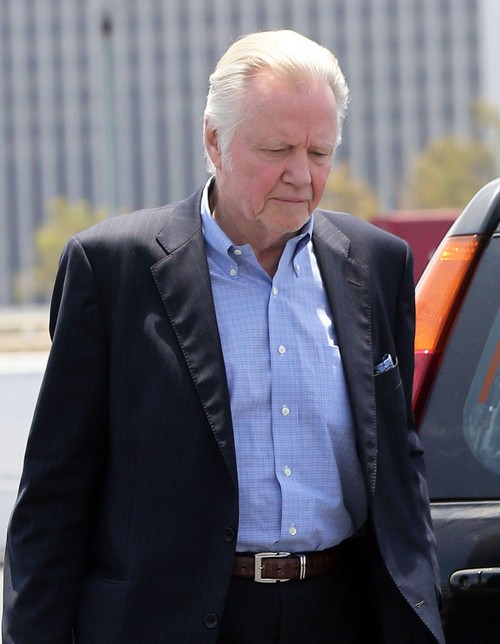 Jon Voight may not have been invited to Angelina Jolie‘s wedding to Brad Pitt, but he’s acting like he doesn’t mind. He’s been giving interviews all morning discussing the wedding and how ‘happy’ he is about it, but I can’t imagine he’s all that thrilled that his own daughter snubbed him in such a public way.

Jon spoke to ITV’s Good Morning Britain this morning, and when discussing Angelina’s wedding, stated, “I’m very happy that I can now legitimately call him my son-in-law, this wonderful fellow who I love, and that they’re very happy. The kids must have had a wonderful time at the wedding because they all had their things to do. It must have been very beautiful. I’m very happy for them.”

All in all, it’s a very nice statement and not at all bitter, which is different from what we usually expect from Jon. After all, this is the same man who claimed that Angelina had mental problems back in 2001. He and Angelina even stopped talking for more than a decade, although they reportedly reconciled back in 2011. Angelina reportedly wanted her kids to spend time with their grandfather, even if she was not too fond of him at that point.

Clearly, she’s still not too fond of him, as exemplified by her not inviting him to the wedding. Instead, her kids ended up walking her down the aisle, with Jon’s absence barely noted in the media reports about the wedding.

Angelina and Brad have also been spotted for the first time since their wedding [which took place at Chateau Miraval in France on Saturday] in Malta, where they’re getting ready to shoot their new movie. I’m betting Jon isn’t going to be invited there, either.