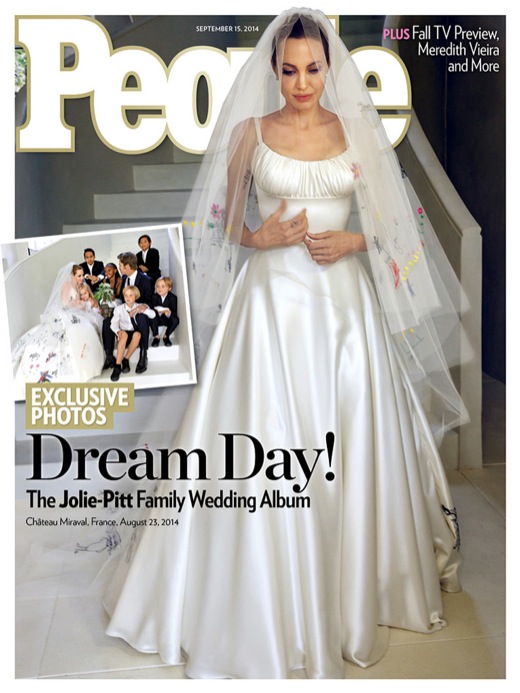 Nobody expected Angelina Jolie and Brad Pitt to release their wedding photos via People Magazine, but the Brange is just full of surprises, aren’t they? Angelina bypasses tabloids to go to the New York Times to announce her double mastectomy, and then they release the news of their wedding via the Associated Press – and then sell the pictures to People? Then again, they have always used People for major milestones, including the birth of their children and the announcement of their engagement. I suppose it’s fitting that their wedding photos debut in the same magazine, if only to keep up appearances with their fan base [a large part of whom subscribe to People].The magazine has full details of Angelina’s wedding dress [custom designed by Atelier Versace and featuring a veil with hand-drawn designs by Angelina’s children], Brad’s and Angelina’s first kiss, and photos of the entire family during and after the wedding.

Angelina and Brad also discussed their wedding with People, saying in a joint statement, “It was important to us that the day was relaxed and full of laughter. It was such a special day to share with our children and a very happy time for our family.”

The international rights to the pictures have been sold to Hello! Magazine, and I expect both Hello and People to sell substantial copies this week. Angelina Jolie and Brad Pitt are still two of the biggest movie stars in the world, and even the innocent bystander is going to want to see those photos.