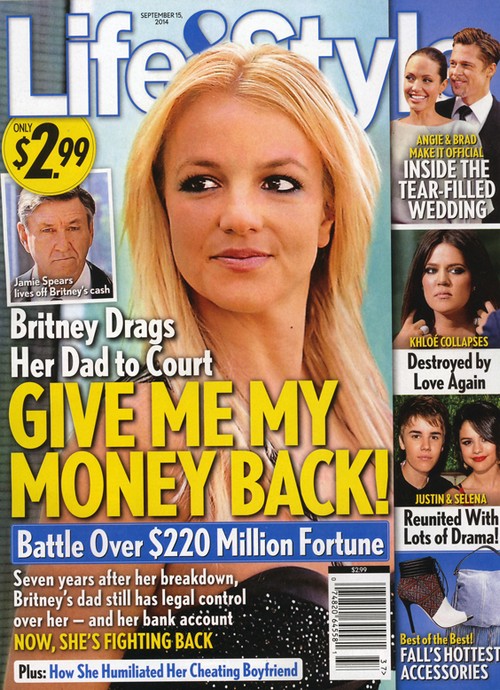 It has been more than 7 years since we all watched as Britney Spears completely imploded on herself. Sure her father, Jamie Spears has helped Britney to get her career back on track and under his close watch she has put together a pretty decent life for herself and her children, but let’s face it, Britney has never been the same. That bright eyed, animated young star that was a ball of personality has been replaced with a somewhat robotic grown woman that just doesn’t exactly have the same appeal. She also hasn’t been in control of anything in years and according to the Sept. 15th print edition of Life & Style magazine she is ready to challenge that.

Sources say that Britney is ready to drag Jamie back to court in order to fight for her $220 million fortune. Jamie has controlled every financial decision that his daughter has made for several years and that’s a situation that Britney is ready to challenge legally. It seems that the singer has reached a point in her life where she is cleaning up messes including her cheating ex, David Lucado and is ready to take charge and go in a completely different direction.Everyone warned Khloe Kardashian that French Montana was bad news but of course she didn’t listen. Khloe prefers to walk on the wild side and the rapper totally catered to that. Khloe was warned that French was using her fame to help catapult his career and she has also opted to ignore proof that he was cheating. It seems that reality has finally caught up with the reality star and according to Life & Style she has collapsed beneath it.

None of us are surprised that Selena Gomez and Justin Bieber have reunited and even less shocking is the fact that their romance is still as drama infused as ever. Less dramatic but equally prominent was Angelina Jolie and Brad Pitt’s wedding two weeks ago. Life & Style has all of the latest details on both of these couples but in the meantime, how long do you think it’ll be before Selena and Justin split again? Tell us in the comments below!