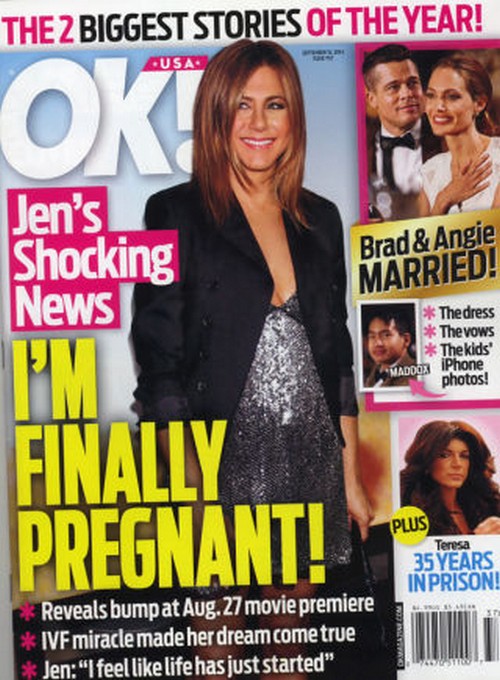 While the whole celeb world has spent the last week focusing on Brad Pitt and Angelina Jolie‘s happy marriage news it seems that Jennifer Aniston hasn’t been nearly as crushed as we were first led to believe.  It’s true that learning her former husband had finally married the woman that he originally left her for was probably not one of Jen’s finer moments, but according to the Sept. 15th print edition of OK Magazine the star has some great news of her own.Sources say that Jennifer Aniston is finally pregnant thanks to a recent IVF procedure. We have been hearing for years about how badly the former Friends’ star has wanted to be a mother and while she recently spoke out about how okay she actually is if it’s not in the cards, it was still pretty obvious that she was hopeful. While we are hearing that Jen is thrilled to finally be pregnant there is no clear indication of how Justin Theroux will figure into the mix. The couple has been engaged for two years but are rarely seen together and currently live on opposite coasts.  After years of trying to piece together the perfect family portrait Jennifer Aniston may be ready to be a single mom.

It’s kind of ironic that while Jen is reportedly celebrating her baby news her ex, Brad Pitt is also celebrating officially marrying Angelina Jolie. It’s amazing how closely the media has watched these three for the last decade, isn’t it? It’s like a competition to see who will end up the happiest- Brad or Jen.  At this point in time who do you think is honestly in a better position? Tell us your thoughts in the comments below!