Kim Kardashian Is Hiding Many Secrets From Kanye West: Will Hollywood Hacker Expose Them 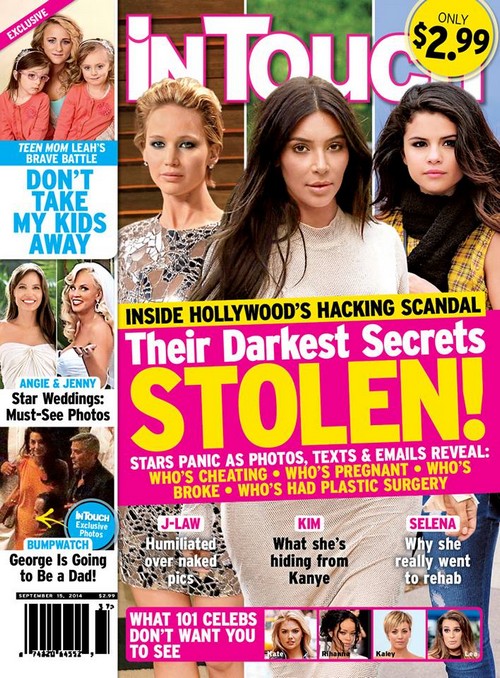 Kim Kardashian may have convinced Kanye West to become her third husband but that doesn’t mean that she has shared everything with him. So much of Kim’s life is purposely lived with a camera rolling in front of her but you better believe that when she keeps a secret it’s a real zinger.  Kim is one of many celebrities targeted by hackers and according to the Sept. 15th print edition of In Touch Weekly naked photos are the least of her concern.

While accessing her iCloud hackers were able to grab info on some of Kim’s deepest and darkest secrets thanks to her private texts and emails. It’s probably only a matter of time before Kanye gets all of the hidden details on his wife’s activities. Also effected is Selena Gomez. While we haven’t heard about naked photos of her circulating, yet, what we do know is that her trip to rehab back in January wasn’t exactly as it was depicted. Her private messages give anyone with access to them a glimpse into just how troubled the young star really is and why she sought help.Is George Clooney rushing to marry Amal Alamuddin because a baby really is on the way? The rumors have been swirling around these two for the last month and every photo op is now an obsessive examination of Amal’s waistline. In Touch has all the latest info on how it really does look like George might be an expectant new dad. Speaking of kids, Teen Mom’s Leah Messner always seems to be dealing with some sort of calamity. Now she is struggling to maintain custody of her children thanks to questions that have been raised about her parenting. Do you think that Leah is a decent mother? Tell us your thoughts in the comments below!