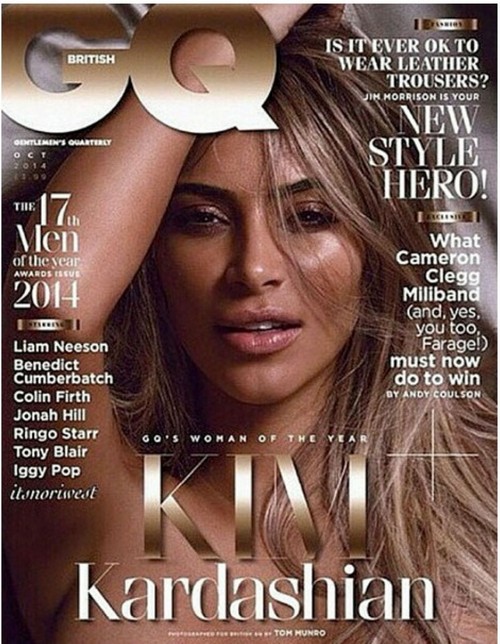 Great, just what Kim Kardashian needs – an even bigger boost to her ego. Kim has been named British GQ’s Woman of the Year, and as if we haven’t seen enough of her already, she posed completely naked for the magazine in honor of the title.

GQ’s website explained its controversial decision to name Kim the ‘woman of the year’, stating, “Right now, she’s the most famous woman in the world. Even [President] Obama talks about her. It wouldn’t be wrong, either, to say she’s redefined the meaning of pop culture in the mere space of 12 months.”

Does it count to say that she’s ‘redefined’ pop culture in the worst ways possible, and that Obama refers to her and Kanye West jokingly, not in praise? And calling her the most famous woman in the world is a drastic overstatement, since I doubt most people outside of the UK and the UK – especially those not in touch with pop culture – even know who she is. Seriously, go up to any educated person in Thailand and ask them who Kim Kardashian is – I guarantee that they’d look at you confused. On the other hand, ask them who Hillary Clinton is, and I guarantee you’d at least get a nod of acknowledgment.

Much like Vogue Magazine after it put Kim and Kanye on their cover, GQ just degraded its image and its value by allowing Kim to become their ‘woman of the year’. After putting legitimately accomplished people like Mila Kunis and Rihanna on their cover, they’re going to put a D-list reality star in their most prestigious issue? People aren’t going to take this seriously, and many people are already complaining about the choice.